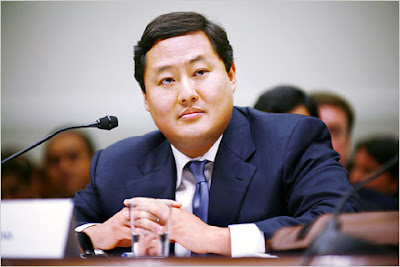 criminal probe into his conduct through stupifying leaps of logic? I speak, of course, of that John Yoo, legal opinion writer and torture apologist extraordinaire, who reaches new depths in his latest column.

Has there ever been an instance of a law school as otherwise classy as the University of California at Berkeley rationalizing the hiring of a key member of the torture regime, and giving him tenure to boot, who is so abjectly ignorant as that John Yoo? In one of those leaps of logic, he writes in that latest column that the poor dears at the CIA who overstepped even his own legal justifications in torturing terror suspects should not be prosecuted because it would be an assault on the entire agency. Bwaaah!

Has there ever been an instance of an outfit as otherwise classy (sic) as the Bush administration encouraging . . . no, make that insisting that the Justice Department's Office of Legal Counsel produce reverse-engineered 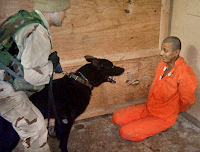 legal opinions justifying a torture policy already well in place and then the successor Obama administration's DOJ accusing that John Yoo of "sloppy legal analysis, misjudgments and possible political interference in the process," but recommending no more than possible disbarment?

Has there ever been a profession as otherwise classy (sic geminus) as the legal profession that hides behind its collective chiffonier when faced with having to sanction a lawyer whose conduct was so glaringly unprofessional -- and arguably criminal -- as that John Yoo? As it turns out, Yoo is a member of only the Pennsylvania bar, and that state's bar association has washed its hands of Yoo's offal -- as well as a complaint by a coalition of 12 civil liberties groups -- by arguing that he is untouchable because he wrote those legal justifications more than five years ago, and that is beyond its statute of limitations. 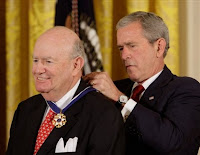 The briefs are flying fast and furious as litigation pertaining to the torture of detainees at Abu Ghraib prison grows like the proverbial Topsy.

In a 2-1 decision written by Lawrence Silberman (above, right), a shameless Appeals Court judge who was awarded the Presidential Medal of Freedom by George Bush and is said to be close friends with Dick Cheney and Donald Rumsfeld, a lawsuit by 200 Iraqis who claimed they were tortured at the prison was thrown out.

Another appeals court threw out an earlier decision and dismissed a lawsuit against a private contractor who worked at Abu Ghraib.

And the military's highest court has scheduled oral arguments next month on two appeals stemming from the abuse of detainees at Abu Ghraib. 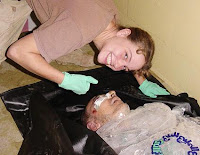 Former Sergeant Michael Smith, an Army dog handler, and former Specialist Sabrina Harman (left), an Army military police reservist, are the first cases the U.S. Court of Appeals for the Armed Forces has agreed to hear since photographs of naked detainees in humiliating positions shocked the world in 2004.

Smith and Harman, who were sentenced to prison terms, say there is insufficient evidence against them, while it should be noted that no one in a position of authority has gotten so much as a wrist slap regarding the CIA-sanctioned abuses.

I GOT THEM MI6 BLUES AGAIN, MAMA

Allegations that officers from James Bond's old outfit, the secret British intelligence service MI6, were complicit in torture will be investigated by Scotland Yard. 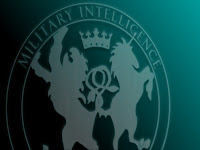 "the conditions under which a non-Briton was held" and the "potential involvement of British personnel."

The case is unrelated to that of Binyam Mohamed, which the Yard also is investigating.

NEW SONG SAME AS THE OLD SONG?
The use of torture and other un-American activities at the prison at Bagram Air Base in Afghanistan have largely gone unnoticed.

But now the Obama administration is putting in place new rules that seem awfully (pun intended) similar to the old ones.

The clincher is that although the Supreme Court ruled in the landmark Boumediene case that Guantanamo detainees were entitled to habeas corpus protections, Bagram detainees who are Afghanis apparently won't have

them although a Bush-appointed judge ruled earlier this year that non-Afghan detainees brought to Bagram do have them.

Yet again, one step forward and one step back.

THE TUNEFUL ANDREW SULLIVAN
Blogger Andrew Sullivan argues in a new Atlantic cover story in the form of a letter to George Bush that only the former president can begin eradicating the stain of his torture regime:

"I have come to accept that it would be too damaging and polarizing to the American polity to launch legal prosecutions against you, and deeply unfair to solely prosecute those acting on your orders or in your name. President Obama's thus far to avoid such prosecutions is a pragmatic and bipartisan one in a time of war, as is your principled refusal to criticize him publicly in his first months. But moving on without actually confronting or addressing the very grave evidence of systematic abuse and

torture under your administration poses profound future dangers. It gives the impression that nothing immoral or illegal took place. Indeed, since leaving office, your own vice president has even bragged of these interrogation techniques; and many in your own party threaten to reinstate such policies in the future. Their extreme rhetoric seems likely to shape—to contaminate—history’s view of your presidency, indeed of the Bush name, and the world’s view of America. But my biggest fear is this: in the event of a future attack on the United States, another president will feel tempted, or even politically compelled, to resort to the same brutalizing policy, with the same polarizing, demoralizing, war-crippling results. I am writing you now because it is within your power—and only within your power—to prevent that from happening."