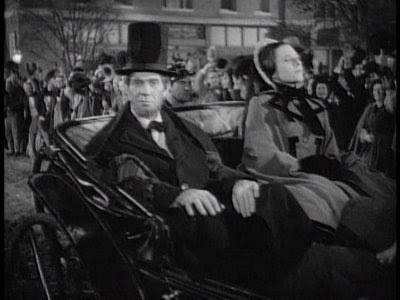 Raymond Massey and Ruth Gordon in Abe Lincoln in Illinois

Are you ready for Liam Neeson as Abraham Lincoln? I'm not sure that I am, but the great man certainly has been played by an eclectic range of actors over the last century starting with the 1908 film The Reprieve: An Episode in the Life of Abraham Lincoln in which Lincoln pardons a sentry who fell asleep on duty, a theme depicted repeatedly in other silent era shorts.

Here is a recap of some of the better known Lincoln movies of past and future, most of them dogs and many of them infatuated with Lincoln's love life, notably his romance with Ann Rutledge, which was short lived, therebygiving Hollywood ample opportunity to embellish: 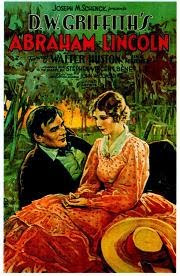 ABRAHAM LINCOLN (1930)
Walter Huston is the bearded one in a biopic directed by D.W. Griffith that portrays Lincoln as something of a Romeo, which would be news to most historians. Early girlfriend Ann Rutledge is played by Una Merkel and Kay Hammond is the missus.

Abraham Lincoln is chockablock with historical inaccuracies, including an over-the-top portrayal of the Lincoln-Rutledge romance and Lincoln delivering his second inaugural address not at the Capitol but at Ford's Theater where he was to be assassinated by John Wilkes Booth (Ian Keith).

The movie, one of only two sound films that Griffith made, was not a hit at the time and is better regarded by contemporary critics. (Beats me why.) It carried the hyperbolic tagline: "Wonder film of the century, about the most romantic figure who ever lived!" The posters were in color, but the movie of course was not. 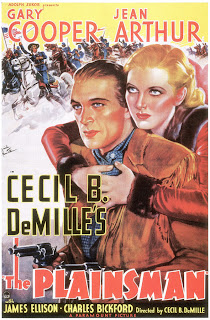 The wobbly plot has Hickok meeting Cody on a paddle steamer. They then take a stagecoach driven by Jane to Kansas where they find that a baddie by the name of Lattimer (Charles Bickford) is supplying surplus Union rifles to the Indians (played by Anthony Quinn, among others). Hickock rats out Lattimer to Custer, Jane is captured by the Indians and then gets captured himself. Hickock professes his love for Jane just as he is about to be tortured, but . . . Hey, if ever a movie deserved a plot spoiler, this is it, but I won't do it.

Did I say that The Plainsman is highly fictionalized?

YOUNG MISTER LINCOLN (1939)
It's Henry Fonda's turn to portray the future president over 10 years of his life as he moves from a Kentucky cabin to Springfield, Illinois, taking nothing of value except a law book, where he begins his law practice. 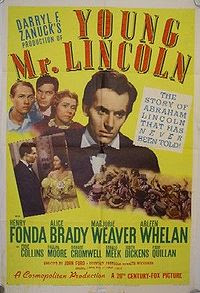 Rutledge (Pauline Moore), courts his future wife Mary Todd (Marjorie Weaver), and agrees to go into politics with nary a hint of the greatness to come in this highly fictionalized account.

This John Ford-directed black-and-white movie was advertised as "The story of Abraham Lincoln that has never been told!" but is pretty pedestrian fare, perhaps the inevitable result of a knock down, drag out fight between Ford and producer Darryl F. Zanuck for control of the film that became so intense that Ford destroyed outtakes so that Zanuck would not try to sneak them in behind his back. Probably a good thing because one outtake had Lincoln meeting his future assassin when Booth would have only been an infant.

Not one of Ford's better efforts, let alone Fonda's, who was initially reluctant to take the part.

ABE LINCOLN IN ILLINOIS (1940)
Raymond Massey plays the most convincing Lincoln in this retelling of his life from his departure from Kentucky to his election as president, while Ruth Gordon isn't bad in her acting debut as Mary Todd.

While the movie is more or less historically accurate, Lincoln is sometimes portrayed as overwrought and it 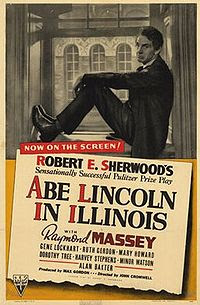 does contain a few howlers.

These include Mentor Graham (Louis Jean Heydt) telling a youngish Lincoln: "Well, Abe, there are always two occupations open to those who have failed at everything else: school teaching and politics."

And Lincoln himself explaining why he can't face Mary Todd before their marriage: "I'd have to tell her that I have hatred for her inferno ambition. That I don't want to be ridden and driven onward and upward through life with her whip bashing me and her spurs digging in me. If her poor little soul craves importance in life let her marry Stephen Douglas. He's ambitious too. I want only to be left alone."

This John Cromwell-directed black-and-white movie was adapted by Grover Jones and Robert E. Sherwood from Sherwood's Pulitzer Prize-winning hit Broadway play. Massey reprised his Lincoln role in the 1962 epic western How the West Was Won. 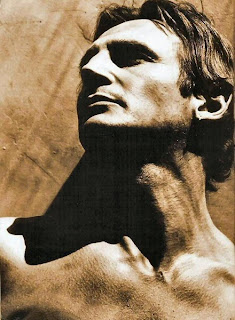 Given that Doris Kearns Goodwin, author of Team of Rivals: The Political Genius of Abraham Lincoln, is a co-writer with Tony Kushner, it is probable that Lincoln focuses on the president's execution of the Civil War and masterly of the now-lost art of bipartisanship and even more likely that Spielberg will avoid the crass fictionalizing of most of the predecessor movies.

Guess who plays Mary Todd? If you said Sally Field, then have a cigar.

* * * * *
Meanwhile, there have been innumerable Lincoln appearances on the small screen, perhaps most memorably Lee Bergere in "The Savage Curtain," a 19969 episode of Star Trek: The Original Series in which Captain Kirk allows that Old Abe was one of his heroes growing up in the 23rd century.