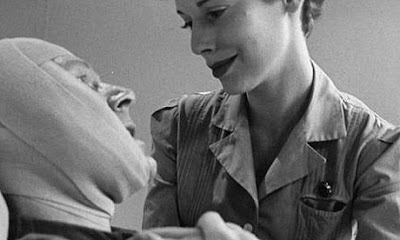 Patricia Wheeler was a Guiding Light star in 1954

The end of the last episode was pretty much like the end of the first: Josh Lewis and Reva Shayne decided to marry "again" then drive off in Josh's vintage pickup truck. "You ready?" Josh asked Reva. "Always," she replied.

And so after 72 years and more than 15,000 episodes, Guiding Light aired its final show yesterday. The soap opera was first broadcast as a CBS radio program just days after Franklin Roosevelt's second inauguration as president. The show, the story of three families in fictional Springfield, moved to television in 1952.

I am proud to see I never saw a single episode. That is except when our mean babysitter wouldn't let us watch anything else.

When I was dating my most recent ex-wife, we used to tape the Guiding Light, along with some other soaps, and watch them in the evenings because she liked them.

I was impressed by the cleverness of the writers. They commonly had five or six stories going, with the expectation that the viewer would get sucked into at least one of them. I still remember fulminations about the Spauldings.

Another trick is that, as summer draws near, they ramp up the stories about the teenagers, then they town them back down as the start of school approaches, so as to catch new viewers during school vacation.

I remember, when I was young, back in the Eisenhower years, listening to soaps on CBS radio when I was home sick from school. They followed Arthur Godrey and Garry Moore.

Victor is still my hero.