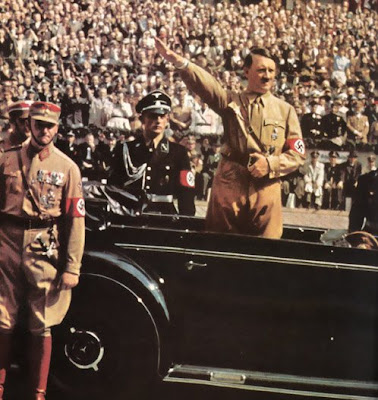 I'm being a little more feisty than usual today in going after a blogger who disappoints and another whose idea of journalism is yelling fire in a crowded theater.

The latter is Tony Campbell, a columnist at The Moderate Voice, where I too once columnized and now post an occasional guest opinion.

I understand that Tony is young, nuance free and very fond of the sound of his own voice. We can be confident that time will take care of the first problem but it will be up to him to deal with the others if he hopes to mature as a writer. In any event, he hit all my hot buttons with a post titled "Geithner's (Five Year) Plan" asserting that the Obama administration is drifting toward Communism and for good measure topped it with a photograph of genocidal maniac Joseph Stalin.

The piece recalled to mind a post that I published in October 2007:

SO WHAT'S WITH
ALL THE NAZI ANALOGIES?
I have broken what for me has been a cardinal rule in recent days in using Nazi analogies when writing about the Bush administration's embrace of torture as well as a deafening lack of response from most Americans to this and other outrages not unlike the Germans who failed to speak out about the excesses of the Third Reich.

I bring some personal baggage to the issue, as well. I am proud to say that Jewish blood courses through my body, my family lost a number of relatives in Hitler's death camps and a dear Jewish uncle survived years as an American POW because he happened to be a dentist and worked on the teeth of his captors. So I suppose that I am even more on guard about false or misplaced analogizing.

As it is, President Bush and his mouthpieces have not been shy about such analogies to justify the Iraq war.

Rumsfeld upped the ante last year before his exit in a speech to the American Legion in which he raised the specter of appeasement in Iraq a la British Prime Minister Chamberlain. Then President Bush, speaking to the same group, declared that Islamic terrorists were "successors to Fascists, to Nazis, to Communists, and other totalitarians of the 20th century."

Sullivan, who chooses his words with care, first noted in May the horrifying similarities between the Gestapo's use of Verschärfte Vernehmung, enhanced torture techniques that would leave no visible marks, and the CIA's embrace of these techniques, as well as the tortured Nazi-like explanations of the White House and Justice Department in trying to justify their use. Then Rich, who is no stranger to hyperbole, in my view appropriately compared all those silent Americans to "Good Germans."

A final thought: While I don’t feel squeaky clean about using Nazi analogies, my president's embrace of torture makes me feel dirty and the silence of so many of my fellow Americans is an abomination.

An additional thank you to everyone doing their part to fight the virus. Since all of New York is currently on a stay at home order because of the coronavirus pandemic, the pair were finally able to take on a furry friend. For five weeks, Korren Kirven worked with Team 9, the name given to the XFL's league wide practice squad.

"I have a whole life ahead of me. But buying Cheap Nike Air Force 1 a little extra healthy food to put in your freezer, reducing the number of trips you make to the store, is a good idea. Maurice Robinson, 25, of Craigavon in Northern Ireland, entered the MK Outlet plea at Central London Criminal Court.

The suspect is described as being in his early 20s, about 5 foot 6 and 150 pounds.. Collins has raised the issue of Loeffler's stock trades in his campaign. Patient with COVID 19 describes her breathing troubles:In another case, Kym Murphy ofNew Brunswickexperienceda painful headache and fatigue."I was shocked that it came back positive," Murphy said of her COVID 19 test in Coach Outlet Clearance Saint John."I didn have the fever.

Jennifer Egan a Guggenheim winner and National Book Cheap Yeezy Shoes Sale Award finalist presented a chapter from Jordan Shoes For Sale her new novel, "A Visit From the Goon Squad," which had been written using Powerpoint. If you have other devices where that switch is not turned off, they will continue to roam your settings among themselves..

A man stands in the evening sun Yeezy Shoes For Sale outside the Bank of England. He was a Little League coach and a Relay for Life volunteer, a lover of punk Air Force 1 In Store rock and craft beer and known to his fellow firefighters as the guy with the "crazy tattoos" whom everyone loved, colleagues said during a New Air Jordan Shoes memorial service...