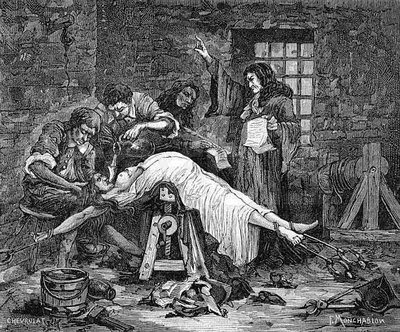 You don't have to suffer from Bush Derangement Syndrome to believe that some seriously nasty things have happened in Washington over the last six-plus years. But when historians take stock of The Age of Bush it is likely that they will find there is no darker stain on that presidency -- and on America at the start of the new millennium -- than the top-down approval of the use of torture.

Almost as abhorrent is this secrecy-obsessed administration's systematic efforts to justify the use of torture on the one hand while denying that it approved its use on the other.

That is the crux of a New York Times’ investigative report this week that found while the Justice Department publicly declared torture to be "abhorrent" in a 2004 legal opinion it then issued a secret opinion a few months later that endorsed the CIA's use of head-slapping, waterboarding and being confined naked in frigid cells, among other hard-core techniques that the intelligence agency had cherrypicked from the cookbooks of Soviet and Saudi dungeon masters.

It is a testament to how far this administration has slipped from the moorings of common decency -- let alone the belief of suckers like myself that the U.S. never would succumb to acting like terrorists in fighting back against terrorists -- that the Times story actually made me fell dirty.

Worst of all, the story was less a blockbuster than a sad confirmation that . . . how do I say this?

That these people beg comparing to certain jack-booted thugs who also went to extreme lengths to justify their acts and approved of the use of verschärfte vernehmung, enhanced terror techniques that would leave no visible marks.

That is a powerful comparison and one that I do not make lightly, but it is extremely difficult to mince words considering the gravity of the actions.

What will historians do?

Should they mince words and pretend that the key players in this outrage -- Attorney General Alberto Gonzalez, vice presidential chief counsel David Addington and Justice counsels John Yoo and Steven Bradbury -- were rogue actors who independently developed the warped view that the best way to respond to the 9/11 terror attacks was to turn the Rule of Law on its ear and engineer a coup d'état on the Constitution without the knowledge of the president and vice president?

The answer, of course, is that George Bush and Dick Cheney not only were in the loop, they believed that they were not just above the law, they were the law and had the legal justification to back up that perfidious claim.

Yoo, who has returned to academia where he is a vigorous defender of what he terms the "creative thinking" of he and his former colleagues at Justice, deserves special condemnation for his reliance on junk law (as opposed to junk science) to justify the use of torture. Notable is a memo that the administration later sort of disavowed in which Yoo, whom first Bush Attorney General John Ashcroft called "Dr. Yes" behind his back, claimed that torture was just fine unless the pain that resulted was equivalent to organ failure or "even death."

It's not that no one in the administration was concerned about the Frankenstein that had been created in the laboratories of Justice. In fact, the secret legal opinions and back-channel maneuvering tell me that at least a few people were cognizant that these actions, justifications and obfuscations would be viewed as undermining core American values, if not downright criminal.

(Which begins to explain that the best the administration can come up with in response to Democratic demands that it turn over secret memos authoritizing torture is the Orwellian pushback that the memos don't violate laws against the use of torture. Heh-heh.)

As the Times notes, there was near panic when Jack Goldsmith, a man with impeccable conservative credentials, replaced Yoo at Justice and found his predecessor's work to be deeply flawed.

This in turn resulted in fears of mass resignations by Justice lawyers unhappy about the approval of torture and the secret NSA domestic spying program, among other draconian administration initiatives, and in part led led to the infamous midnight showdown at the hospital bedside of then-AG Ashcroft that pitted White House counsel Gonzalez and chief of staff Andrew Card against Acting AG James Comey and Ashcroft's terrifically pissed-off wife.

The pool of yes men at Justice apparently was not very deep, and Ashcroft's successor, Gonzalez, had trouble finding a replacement for Goldsmith after he jumped ship. After much hankie wringing, Gonzalez eventually named Steven Bradbury, whose embrace of junk law includes the belief that the president can legally order assassinations under certain circumstances.

But White House officials, still smarting from Goldsmith's perceived disloyalty and Comey's perceived whimpery, wanted to keep an eye on Bradbury – "he was sort of on trial," as one Justice official told the Times -- because of fears that he was a closet softie.

And so they put one of the president's most trusted advisors and deep thinkers on the case -- Harriet Meirs.