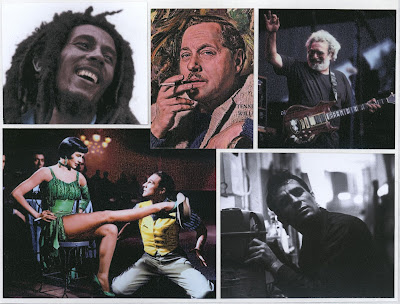 
Writing about MILES DAVIS is daunting, if not downright intimidating. For one thing, the legendary trumpet player probably has been written about and analyzed more than any musician-composer this side of Beethoven. For another thing, a word like "legendary" does not begin to capture the enormous influence that Miles exerted on jazz. (5/25/08)

JERRY GARCIA did not seek out fame. A gentle soul who just wanted to play music, fame found him. And despite a long career as an extraordinary guitarist that brought him adulation, gold records and eventually wealth, happiness remained elusive and fame finally killed him. (8/1/07)

Being young is to love JONI MITCHELL's music. Growing older is to understand why you do. She taught me a most valuable lasting lesson about musicians. At several turns in her career she went places that I didn't want her to go because I was content with where she was, but we made a deal: If I trusted her I would be rewarded. And so I have been. (6/1/08)

It would have been a damned shame if TENNESSEE WILLIAMS couldn't write, because I can't think of any man of letters whose family and friends provided so much rich material. This gifted playwright and not bad short story writer drew long and hard from the deep well of tormented and eccentric souls who populated his life and appear in various guises in his best known works. (2/25/08)
Posted by Shaun Mullen at 12:08 AM
Email ThisBlogThis!Share to TwitterShare to FacebookShare to Pinterest