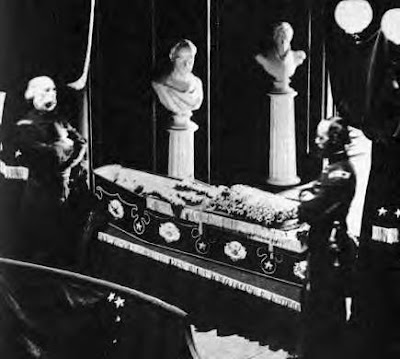 Abraham Lincoln's journey to his reward following his assassination in April 1865 was anything but smooth. There was a controversy over a photograph taken of his open coffin, an attempt to steal his corpse and his body was exhumed an extraordinary 17 times. 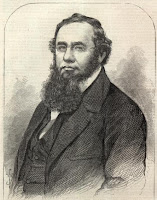 Lincoln's funeral train left Washington on April 21, six days after his assassination, and more or less retraced the 1,650-mile route that he had traveled as president elect. About seven million people -- or one in four Americans -- are said to have seen the train or the president lie in state, and while his coffin was opened at several stops, Secretary of War Edwin Stanton (photo, above right) forbade photographs and ordered one taken against his orders in New York City (above) to be destroyed.

Except that it wasn't. 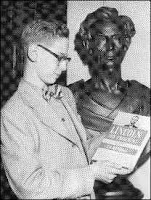 left), whose fascination with the late president led him to travel to Springfield, Illinois in 1952, where he visited the Illinois state government complex and examined papers from the collection of John Nicolay and John Hay, Lincoln's White House private secretaries.

Among the papers was an envelope from Stanton's son, Lewis, dated 1887 that had been sent to Nicolay, who was the first and among the most authoritative Lincoln biographers.

Inside were two pieces of regular stationery paper and another folded in thirds. Inside the last sheet was the sepia tone photograph that the war secretary had ordered destroyed. 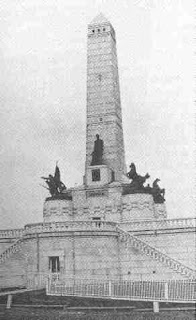 Terrence Mullen (no relation) was a successful counterfeiter who hit a rough patch in 1876 when Ben Boyd, his talented counterfeit plate engraver, was arrested. Running out of money, good and bad, Mullen and cohort Jack Hughes hatched a bizarre plan to steal Lincoln's body from his tomb in Oak Ridge Cemetery in Springfield, Illinois.

Mullen and Hughes planned to take the body to the Indiana dunes some 200 miles away at Lake Michigan where it would be buried in the shifting sands and winds would soon obliterate all traces of the burial. Relying on natural landmarks to mark the exact spot, Mullen (photo, below left) planned to play the role of innocent bystander and notify the Illinois governor that he had been given assurances that the president's remains would be returned upon payment of $200,000 -- about $4 million in today's dollars.

Mullen's bad luck continued as the plotters were infiltrated by Lewis Swegles, a professional informer or "roper" for the Chicago Secret Service office, who had helped apprehended Boyd.

Ordered to keep Hughes (photo, below right) under surveillance, Swegles, posing as a recently released convict from Nebraska who was looking to make some easy money, ingratiated himself into the co-conspirator's confidence during a series of encounters at The Hub, a Chicago saloon, where ironically there was a bust of Lincoln over the bar.

Hughes introduced Swegles to Mullen, and the three took the night train to Springfield on November 6. Swegles was assigned to be the lookout, and after Mullen and Hughes removed the body from the marble sarcophagus in the tomb he would drive a horse and wagon with the body to the dunes.

Early on the morning of November 7, a moonless night, Mullen set to work cutting a padlock on the sargophagus but broke the saw blade, was forced to resort to filing the lock and finally cut it. Mullen and Hughes left the coffin closed but had it partially out of the sargophagus before they repaired to a tree about 100 yards from the tomb while Swegles went to get the wagon. They were shocked to see a swarm of detectives and fled to Chicago where they were arrested.

On November 20, a special grand jury convened in Springfield and the two were charged with attempted larceny and conspiracy. No more serious charge could be placed against them since at that time there was no state law making grave robbing a felony. Both were found guilty at trial in May 1877 and sentenced to one-year terms in the state penitentiary at Joliet.

Lincoln's rest had been disturbed repeatedly in the decades after his death and he had been moved some 16 times prior to 1901 when his tomb needed major repairs because it had been built on unstable soil. Reconstruction would take 15 months and there were fears of another theft attempt, so the coffin was to be placed in a cage 10 feet under ground and encased in perpetuity in two tons of concrete. 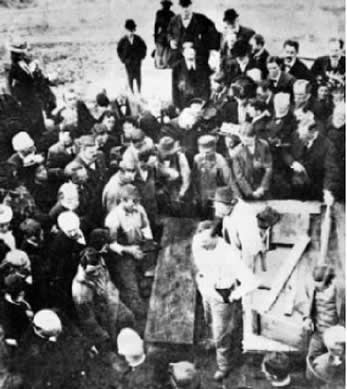 The permanency of the move was complicated by rumors that it was not Lincoln in the coffin, and so on the appointed day and following the instructions of Lincoln's only surviving child, Robert Todd (photo, below left), plumbers Leon P. Hopkins and Charles L. Willey chiseled an oblong piece out of the top of the lead-lined coffin. 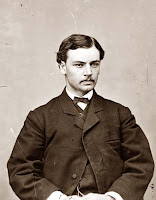 The piece was just over Lincoln's head and shoulders. When the casket was opened, a harsh smell arose. Some 23 people, many with their hats removed out of respect, slowly walked forward and peered down.

From the melancholy expression, whiskers and a wart on his cheek, the president was absolutely recognizable, but his eyebrows had disappeared while his funeral suit -- the same suit that he had worn at his second inaugural -- was covered with yellow mold.

Additionally, there were some bits of red fabric that were thought to be all that remained of an American flag.

Among the 23 people and the last person alive to see Lincoln was 13-year-old Fleetwood Lindley, who died in 1963.

Lindley (photo, right) was allowed to hold one of the leather straps as the casket was lowered and the concrete was poured.

"I was not scared at the time," he was to recall, "but I slept with Lincoln for the next six months."

Great article you got here. I'd like to read a bit more concerning that topic.
By the way look at the design I've made myself High class escorts

Thank you, Shawn. Very interesting article. It will be something to think about
as we view the presentation of one of the copies of the casket. Lincoln was certainly as interesting in his death as he was in his life.