Sussing Out The California Pot Crackdown 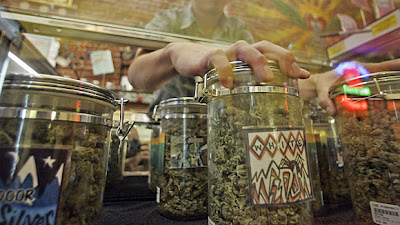 Federal prosecutors have sent letters to landlords and owners of dispensaries across California warning them to halt sales of marijuana within 45 days or face property seizures and other legal backlash, though some raids have already commenced.

The Justice Department asserts, as it did during the Bush administration and earlier in the Obama administration that federal drug laws trump state drug laws. While may be true in some cases, the assertion is constitutionally dubious in the case of marijuana that's grown, sold and used within the state of California.

The Supremacy Clause states: "This Constitution, and the Laws of the United States which shall be made in Pursuance thereof; and all Treaties made, or which shall be made, under the Authority of the United States, shall be the supreme Law of the Land; and the Judges in every State shall be bound thereby, any Thing in the Constitution or Laws of any State to the Contrary notwithstanding."

All of this makes the Justice Department crackdown all the more puzzling.

It's not like the feds don't have anything better to do with their time and money, and as priorities go shutting down a bunch of dispensaries that provide a modicum of relief for cancer, HIV/AIDS and glaucoma sufferers should be very low on the list.

"How can the Obama administration say that it’s fine for sick people to use this proven medicine, and yet tell them they can’t have any legal place to get it?" asked Rob Kampia, executive director of the Marijuana Policy Project. "Medical marijuana isn’t going away. Over 70 percent of Americans support making medical marijuana legal, and 16 states allow it."

Oh, and by the way, Mr. President, more people support the legalization of marijuana than support you.