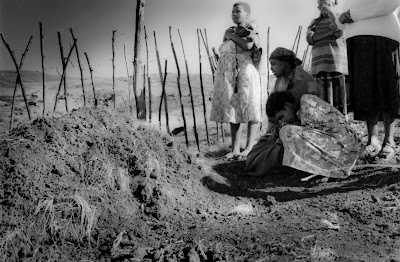 Nozuko and family bury baby Yanga in their vegetable garden
American ex-patriot Susan Winters Cook is that rarest of contemporary photojournalists because she still shoots in black and white.
"I believe color distracts from the image unless it has a direct role in the message," she tells me, and that is abundantly clear from her newly published Nozuko's Story: A Story of an Africa Family.

Nozuko's Story is the story that Cook was born to write and I can say that with authority. She a 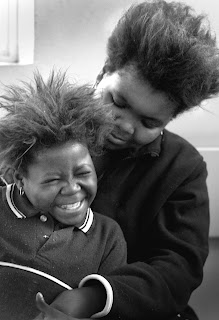 and I worked together for 15 or so years at the Philadelphia Daily News. I was a demanding editor and she a demanding shooter, and she pretty much single-handedly convinced our bosses to underwrite several trips to South Africa where she ventured into the squalid townships where few white journalists would go for a series of photo essays that were to win her a Robert F. Kennedy Prize, the Pulitzer for photojournalists, and later chronicled the end of apartheid with the release of future President Nelson Mandela from prison. No newspaper covered that pivotal era in South African history better than the Daily News or more eloquently than Cook.

Cook fell in love with South Africa, its enormous problems and all, and from the vantage point of her farm in the Eastern Cape has tirelessly documented the nation's staggering HIV/AIDS epidemic through magazine articles, public health booklets and now Nozuko's Story.

With 5.7 million people with HIV/AIDS -- about 12 percent of the population -- South Africa is believed to have more sufferers than any other nation. Between 42 and 47 percent of all deaths are due to HIV/AIDS, according to the United Nations. This situation has been made considerably worse by a national government that refused to acknowledge the existence of the epidemic for years and refused to allow international pharmaceutical companies to provide free or cheap anti-retroviral drugs.

Thabo Mbeki, who succeeded apartheid buster Mandela as president, didn't help matters, while his Health Minister, Manto Tshabalala-Msimang advocated a bizarre diet of garlic, olive oil and lemon to cure the disease. Although many scientists and political figures called for her removal, she was not ousted until Mbeki himself was removed from office. 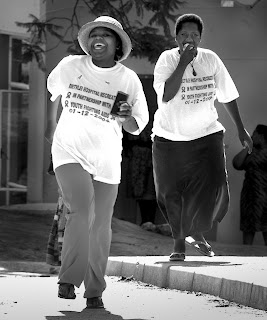 Nozuko's Story chronicles in words and photographs the young woman's journey through sickness and survival, hope and despair, and brave activism on behalf of HIV/AIDS sufferers. In the process she discovers herself.

Susan met Nozuko Ngcaweni at her home in a remote Xhosa village in South Africa's Eastern Cape in 1999 after the 23-year-old daughter Nqobile (photo, above left) were diagnosed with HIV. Nozuko's son Azola remains disease free, while a third child, Yanga, born after she was diagnosed, died at six weeks of a cause that remains unknown because Nozuko's family could not afford mortuary fees.

"Yanga's grave is as rural as the life she left," Cook writes, "a mound of freshly turned soil surrounded by dry winter grass and harvested mealie [maze] stalks."

Yanga's death plunged Nozuko into depression and she soon was hospitalized with fever, cough and diarrhea -- all HIV symptoms. She was barely able to walk. She later was felled with tuberculosis, South Africa's other serial killer, but although the TB is contained the medications she takes would raise hell with her liver in the future.

Her health eventually restored, Nozuko returns home a shadow of her former self after a visit from a Department of Health official who inspires her to turn everyday tasks into goals.

"I'm sick and tired of this," Nozuko tells Cook. "I want to wake up. I have many things to do. to go to see others who have HIV, and to teach those who do not have HIV."

She adds, "I see that I'm going to get better." 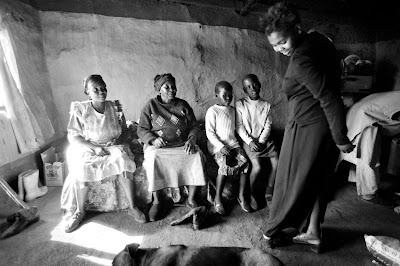 A year after flirting with death, Nozuko is her plump and sassy self again and she resumes her work as a member of the Disclosure and Acceptance Campaign run by the National Association of People Living with HIV and AIDS (NAPWA).

"The cavernous belly has become round again, the once bony thighs now support a determined stride, the sagging breasts transformed into the full figure of a woman.

"A friend has brought hand-me-down clothing to Nozuko and her sisters (photo, above). Girlish sounds fill the room; giggles, oohs, and jesting rudeness as the chaotic contest consumes the young women. Nozuko struts a new outfit in front of her cheering sisters and auntie. She assumes runway-like poses, thrusting a shoulder, then a hip, the toss of her head says, 'I am woman, I am alive!' "

Nouko's luck begins to turn. She does a radio interview for South Africa Broadcasting Company that is heard by a woman in Pretoria who is drawn to Nozuko's deep voice and the story of survival and inspiration that she tells. The woman contacts and says that she and her husband will pay for the anti-retroviral drugs that Nozuko cannot afford. She is speechless for probably the first time in her life.

By 2004, Nozuko (with fellow activist Nonjamulo in photo, above right) is receiving a salary for her counseling of HIV patients at a hospital.

There are the inevitable questions when Nozuko visits villages for NAPWA, first as a volunteer for group meetings and then doing one-on-one counseling.

"What do I do when my husband returns from Joburg and doesn't want to use a condom?" is typical of frequently asked questions.

Nozuko advises calm discussion between partners. "If you have a condom, just don't throw it across the room at him, but talk to him about HIV." 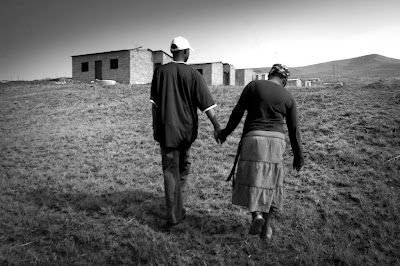 The year 2006 is huge for Nozuko. She takes up with Lawrence (photo, above) whom she marries the following year. Cook visits the U.S. and Texas State University, which has mounted an exhibition of her photographs. She brings the survivor along so that students "could encounter the real Nozuko."

Her HIV status requires a special waiver and it takes the intervention of a Texas congressman to get one. After a missed flight and several airport marathons over 39 hours and eight time zones, Cook and Nozuko arrive in Austin. "Nozuko settles into a porch swing wearing a cowboy hat. She eats a few bites of chilli and then she sleeps for two days."

After a lecture to 350 journalism students that ends with sustained applause, Nozuko and Susan fly to Rhode Island where she sees the Atlantic Ocean from the other side of the world for the first time (photo, below). 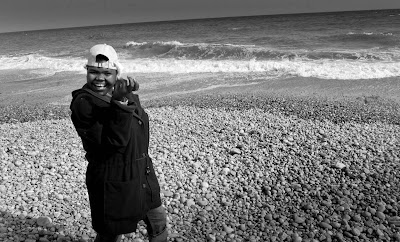 "She finds a shell and holds it up like a prize and dances away from the waves pushing toward the top of the dunes. We walk past an old concrete piling submerged in the sand. This was part of the foundation of a beach house built by my grandmother that was destroyed by a hurricane in 1938.

"There is little similarity between this place and the home of Nozuko's ancestors, the difference being between mountains and sea, northern and southern hemispheres, ancient and upstart cultures.

"The ancestors and the storms are the common ground we share."

In August of this year daughter Nqobile (Zulu for warrior) has to fight yet another battle with HIV.

On a bitterly cold night when Lawrence is away in Durban searching for work, Nqobile takes ill and Nozuko knows that she has to get her to a hospital. Son Azola, now on the verge of manhood, carries his sister 500 yards to a road where they can take a bus to a hospital in Durban 38 miles away. 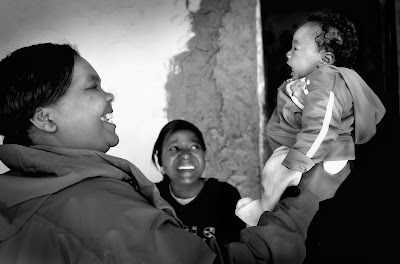 "Would this be the time when Nqobile's body simply will not be able to rally again?

"Nozuko has seen enough to know what's going on. Yet there has been no acceptance in those around her of the concept that Nqobile will never get better. Although Nozuko has raised the subject with them a number of times, her family -- son, sisters, mother, husband -- will not entertain the idea that they could, and eventually will, lose Nqobile.

"I believe some of this is cultural," Nozuko reflects, "because death is something we do not discuss."

Nozuko's Story concludes with a sister going into labor. Nozuko delivers a baby daughter (photo, above) after being told that it would be seven hours before an ambulance could arrive.

"Babies come into this world on their own schedule and Nozuko knows just what to do," Cook writes. "She had delivered her own baby 14 years earlier when Azola was born; once again, an early birth in a remote area.

"Gloves, scissors, a towel and thread; another girl joins the family already wealthy with women." 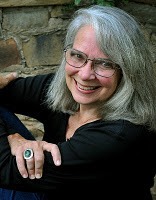 All photographs
Copyright Susan Winters Cook
Posted by Shaun Mullen at 12:10 AM
Email ThisBlogThis!Share to TwitterShare to FacebookShare to Pinterest