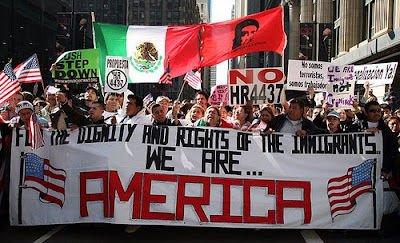 Latino voters swung Republican red Colorado to Democratic blue in voting for Barack Obama 2008, and with anti-immigrant rhetoric reaching volcanic levels among GOP presidential wannabes, the party can pretty much write off the Latino vote there and in other swing states in yet another indication that predictions the incumbent will be beaten are premature.

Latinos are, in fact, the fasting growing bloc of voters, but any chance of a sizable number of them voting for the eventual Republican nominee went up in smoke at the president debate in Las Vegas last week as most of the wannabes piled on immigrants with a vengeance. Michele Bachmann and Herman Cain tied for the biggest demagogue awards with their proposals for a 1,200 mile border fence, double walled in Bachmann's case and electrified in Cain's, although the pizza mogul did not propose an alligator-filled moat as he had previously before saying it was a joke.

Mitt Romney is considered by most observers to have the best shot at unseating Obama and his views on immigration have been more moderate than most of his peers, but his criticism of a Texas law that allows some children of illegal immigrants to attend state colleges on in-state tuition means that he too is on the long list of unpalatable nominees for Latinos.


"He can make as many trips to Florida and New Mexico and Colorado and other swing states that have a large Latino population, but he can write off the Latino vote," Lionel Sosa, a strategist in Texas who advised Bush and John McCain on appealing to Hispanics, told The New York Times. "He's not going to gain it again."

In a Pew survey last year, Latino voters ranked education and the economy as their top issues (memo to Republicans: abortion was well down the list), and there was strong support for state-level "Dream" acts like the Texas law and 61 percent disapproved of more border fencing.

There are 50 million Latinos in the U.S. and most are not "illegals," as the wannabes call them, but the GOP has managed the neat trick of insulting all of them as it strives to make the party even less inclusive.

Despite Obama's vulnerability because of the stalled economic recovery, the Republican nominee will be vulnerable on bread-and-butter, environmental and women's issues.

Even Romney, who as Massachusetts governor engineered a largely successful health-care reform initiative, now disavows it, while all of the Republican wannabes oppose ObamaCare. That program, portions of which have not yet been phased in, is extremely popular among the elderly, the poor and infirm, as well as the parents of young adults who can now remain on their health-insurance policies through age 26.

Then there is the Republican coddling of the super wealthy and Wall Street at the expense of the middle class. Not exactly a vote getter, eh?

The wannabes oppose requiring the super rich to pay larger taxes and close tax loopholes and most of them, in addition to opposing health-care reform, want to abolish Social Security and Medicare.

The contrast between Obama and the wannabes on the environment is especially stark. Beyond global warming denial, they want dirtier air and water by defanging the Environmental Protection Agency. And fuggedabout underwriting non-fossil fuel alternatives that will create jobs and reduce reliance on Big Oil and Big Coal.

Women, who voted for Obama by a 56-43 percent margin in 2008 (men split their vote more or less equally) represent potential swing voters, but the party's record and the wannabes' stands on issues of concern to women who do not walk two steps behind their men are draconian, so that's another likely write off.

Which pretty much leaves white men, who already make up a large portion of the Republican voter base. The only problem for Republicans is that there are not enough of them, and when you factor in Democratic male loyalists, as well as blacks, Latinos and women who will vote for Obama, the idea of retaking the Oval Office would seem to be illusory.

As it is, the Republicans are more than capable of blowing an history opportunity. Beyond Romney, they have John Huntsman, an eminently likeable (which Romney is not) former two-term governor and former ambassador to China.

But Huntsman is barely on voters' radar in the latest Iowa poll with only 2 percent of respondents saying that they would support him. Meanwhile, a motivational speaker who made his nut offering free pizza toppings leads at 28 percent.