In Praise Of The Great American Garage 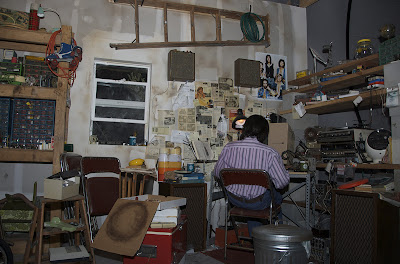 The company that revolutionized the way we work, live and recreate was started in that most American of places — a garage.

It was in the garage of a ranch house on a quiet suburban street in Los Altos, California where the late great innovator Steve Jobs (that's his back in the photo) and business partner Stephen Wozniak launched the Apple dynasty in 1976.

It was in a suburban Seattle garage the previous year thatBill Gates and Paul Allen Bill Gates designed a minicomputer that would be the start of Microsoft, it was in the garage of another suburban house a few miles from the Wozniak family home that David and William Hewlett invented the audio oscillator in 1938, launching the Hewlett-Packer Company, and another Seattle garage where Jeff Bezos launched Amazon in 1994.

It was in the Dayton, Ohio garage owned by the parents of Orville and Wright invented the first engine-powered airplane that could fly in 1903.

Then there are all the fantastic garage inventions brought to us by Hollywood, include the DeLorean time machine in the Back to the Future trilogy and the jetcar in The Adventures of Buckaroo Banzai Across the 8th Dimension.

And, of course, countless bands got their start in garages, perhaps most famously the Allman Brothers, which brings us back to Steve Jobs, whose engineers developed Garage Band, the popular MacBook recording app.

Who have I missed, and do you have a favorite I-did-it-in-the-garage story? Mine? I lost my virginity in the backseat of a car parked in a garage.