How Amazon Changed My Life -- And Yours 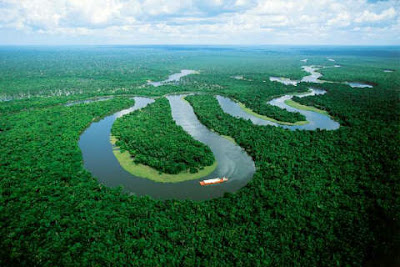 NO, NOT THAT AMAZON!

It is hard to believe that Amazon is now 15 years old and keeps on growing. No, make that growing relentlessly as it announced this week that its third-quarter earnings were up a staggering 44 percent to $10.88 billion.

I used to feel a bit guilty about spending my dinero at Amazon and not a local mom and pop store, but when you consider that the last half dozen things that I have ordered from Amazon -- 100 feet of network cable, French onion soup bowls, a new printer, printer cartridges, a memory card for one of my cameras and an out-of-print book on Tuscan cooking -- would be tough to find at most stores and the Walmarts of the world long ago drove mom and pop into retirement, you understand why Amazon has been such a hit.

Now if it would only drive Sears out of business, which is not farfetched considering that as a $100 billion company it has about 12 times the value of Sears.

Based on personal experience, Sears is the worst run retailer in America despite competition from Kmart, which it owns. When we purchased a washer and dryer from Sears, picking it up was agonizing and getting it hooked up a nightmare. When we purchased a lawn mower from Sears we bought an extended warranty and maintenance plan that Sears conveniently forgets each winter when we take the mower in for servicing. The one thing that Sears always seemed to be good for was their Craftsman tools with their lifetime guarantees, but the last Craftsman tool I bought -- an impact wrench -- broke the first time I used it.

Amazon, on the other hand, is a walk in the park.

I have never had problems with its merchandise, whether it be a polaroid camera filter or a 35-inch television, and as a member of Amazon Prime I get free expedited shipping (okay, it runs $79 a year). I seldom buy new books anymore, preferring to buy them used from Amazon-approved small business people. When it is claimed a book is in excellent condition, it is, and some of my purchases obviously had never been opens because the dust jackets were immaculate and the spines from-the-publisher tight.