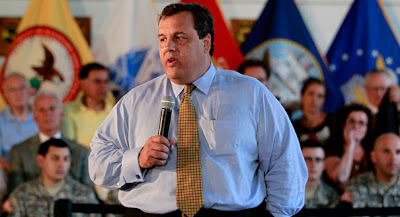 As predicted here, Chris Christie has decided not to seek the Republican president nomination, unfreezing a race that has seemed to be moving in slow motion as the party faithful and campaign contributors with deep pockets waited to see what the New Jersey governor would do.

Not stated in Christie’s boilerplate announcement this afternoon are the less apparent reasons why he won’t run. They include the fact that:

* He is, in many respects, a RINO. He favors gun control, believes that global warming is real, has taken a moderate stance on immigration, and named a Muslim as a state court judge while condemning opponents of the so-called Ground Zero mosque in New York City.

* A broad majority of voters do not yet have an opinion of him and according to one poll, only one-third of Republican primary voters say they wanted him to run.

* He has little experience governing and has stumbled badly in some respects since beating incumbent Governor Jon Corzinez in 2009.

* He has serious health issues, including asthma which has led to several hospitalizations, and is morbidly obese.

Christie was being pressured to enter the race by a group of wealthy donors in the New York area, among other places, in yet another sign of the deep dissatisfaction with the Republican presidential field.

The governor has repeatedly said he is not interested in seeking the nomination and would have until the end of October to join the race, but the pressure on him was ramped up last week with the rollout of a $1.5 million television ad campaign praising him.

Christie’s appeal largely was because of his successful efforts to take on public employee unions in an effort to cut New Jersey’s budget deficit and the fact that unlike Texas Governor Rick Perryz, who has stumbled in recent weeks, he is not a barnburner although he can be candid.

At a political forum last week, he hinted of the decision he announced yesterday when he spoke with distaste of the prospect of finding himself "in a hotel room in Des Moines and its 5:30 in the morning, and it’s 15 below, and it’s time for me to get up and go shake hands at the meatpacking plant."