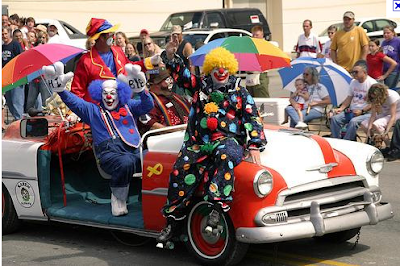 Those wild and crazy Republican presidential wannabes outdid themselves this week as they scrambled to take the wheel of the GOP clown car.

Herman Cain, who is rising faster in the polls than a French souffle, likes to brag about his management chops, but if the way he has managed his own campaign is any indication, he should go back to business school.

Which the former pizza magnate certainly will have time to do, because judging from a variety of reports the Cain for President operation is in chaos and the man himself shows little indication of taking his own candidacy seriously. Which is appropriate because anyone with two brain cells to rub together and has looked closely at Cain wouldn’t take him seriously given that he has hardly shown up in the two key early battleground states — New Hampshire and Iowa — and has been more interested in promoting his new book than courting wealthy donors.

* * * * *
If Cain's 15 minutes of fame are in overtime, his bubble will burst soon enough, and the logical recipient of the voters that Cain siphoned from Rick Perry is . . . . Rick Perry.

Problem is, the Texas governor's advisers are having trouble getting that spinning pinwheel off his head, as one pundit put it. It is as if Perry is begging to not be taken seriously with his repeated forays into birtherism and his now oft-quoted view that "It’s Fun to Accuse the President of Not Being an American."

Perry has been so unhinged lately that his advisers are whispering that he may sit out the rest of the Republican debates. Given his unenergetic and ill-prepared prepared appearances, that might not be such a bad idea.

* * * * *
Louisiana Governor Bobby Jindal won re-election by a landslide the other day and the inevitable calls for him to enter the race for the presidential nomination followed despite his endorsement of Rick Perry.

That would be rich for a couple of reasons: Louisiana is about as much like the rest of the country as a crawfish is like a Hereford cow. And Jindal — named Piyush Jindal at birth by his Indian parents — is a target of Perry's birther buddies.

* * * * *
Another week and another flip-flop for Mitt Romney, who were it not for the lunatic fringe Republican base and concerns over whether he has a pulse, should be running away from the field as the only man who stands a chance of unseating our socialist president.

The former Massachusetts governor had vociferously (for him) supported the anti-union rules instituted in Ohio by Governor John Kasich, who faces the backlash of angry pro-union voters in the form of an upcoming referendum to roll back the rules. Then Romney said this week that he would remain "neutral" on the referendum, which he followed up on by apologizing for "confusion," followed by a statement that he supports the rules "110 percent."

* * * * *
Pat Robertson has been a reliable Republican-supporting wack job since forever, so it was shocking to read that, in a rare moment of candor, he described the GOP presidential field as "extreme" on his 700 Club television show.

His Rabidness warned that the party's base is pushing potential nominees to take such extreme positions that they will be unelectable. "Those people in the Republican primary have got to lay off of this stuff," he whined. "They’re forcing their leaders, the frontrunners, into positions that will mean they lose the general election . . . They’ve got to stop this! It’s just so counterproductive!"

* * * * *
In a vivid example of the pot calling the kettle . . un, I won’t go there, Herman Cain has blustered about how his 9-9-9 tax "reform" flapdoodle would include a crackdown on tax deadbeats.

It turns out that Cain was one himself in 2006 when he failed to pay Georgia state income taxes. In fairness to Cain, he was undergoing treatment for cancer for much of the year, but nevertheless fought efforts by the state to get him to pay up. He finally did so in 2008.

Although not as over the top as Al Gore's boast in 2000 that he invented the Internet, Mitt Romney's claim that he played a key role in creating the modern American economy -- which is to say the revolution in corporate takeovers, the increase in executive compensation and acceleration of outsourcing -- also fails the sniff test.

There is no question that Mitt made his nut by being among the executives doing those things, but he was by no means in the vanguard. And it's kind of ironic that those things are the very things that Occupy Wall Street protesters are railing about, none of whom it can be safely assumed with vote Republican in 2012.

"I regard Cain’s dominance as just the latest sign of the degeneracy on the American right. He’s the ultimate candidate for a Palinized party: based on talk radio, uninterested in government, ruled by unreason, propelled by resentment, fixated on power. Maybe Cain is the dynamite to reveal this circus masquerading as a political party as the farce it has become."