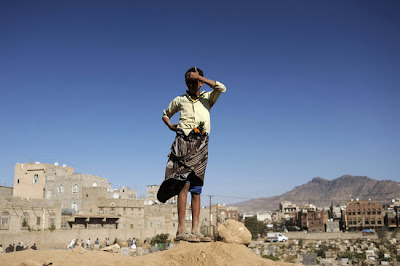 Observations in the wake of the death of Colonel Muammar el-Qaddafi:

* The victory of middle-class professionals, rag-tag militias and tribal forces over a well-equipped, well-trained military in a relatively brief civil war is enormous.

* Given the many conflicting stories, a full accounting of the circumstances surrounding the despot's death is mandatory.

* Lost in the hubbub was that Gaddafi's feared son Mutassim also was killed.

* Beyond divvying up the spoils of civil war and sharing the oil wealth, the most important job of the transitional government will be to reconcile the many factions, including the Islamists and secularists.

* While the road the Arab Spring takes will remain rocky, new energy has been injected into the movement to replace kings and despots with democracy.

* Yemen, which has been wrenched by crackdowns on protesters, may be the next Middle Eastern country to fall because, like Libya, it has a weak state and strong tribal loyalties. Jordan is likely to follow Yemen.

* European power, too often absent in the war on terror and regional conflicts requiring international intervention, was felt, with France and Great Britain taking leadership roles.

* The Republican Party, once the dominant voice in foreign policy matters, stood silently on the sidelines except when criticizing the commander in chief.

* The contrast between Secretary of State Hillary Rodham Clinton, who seems to be everywhere, and her Bush administration predecessor, who seemed to be nowhere, is striking.

* The Obama Doctrine, a hybrid of limited intervention and conventional warfare with collective rather than unilateral actions and heavy reliance on drones, succeeded admirably. There was not a single American death.

Posted by Shaun Mullen at 7:25 AM
Email ThisBlogThis!Share to TwitterShare to FacebookShare to Pinterest