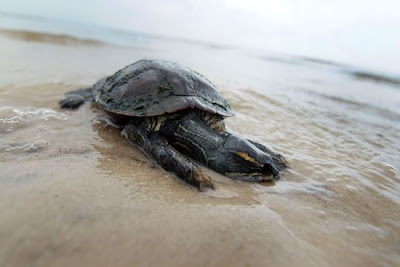 Well, I'm back in from a road trip and the big story is why Sarah Palin's high, raspy voice is a turn on for some people. (Just kidding. Sort of.) I myself am a little more concerned about the latest round of FBI and airline security lapses that nearly allowed the Times Square bomber to fly far, far away. (What if Al Qaeda had brought their A-Team and not a bumbler?) Oh, and that ongoing environmental disaster in the Gulf of Mexico.

Two and a half weeks after the billion dollar BP-leased Deepwater Horizon oil rig exploded, taking with it the petro giant's blatantly false efforts to portray itself as a green "Beyond Petroleum" company, there seem to be three camps regarding the disaster:

* The Shit Happens Camp that is made up of people who believe the spill is nothing more than the price of doing business, oppose clamping down on Big Oil as well as pouring billions of dollars into alternative energy programs.

* The Sky Is Falling Camp that is made up of people, most of them rabid environmentalists, who want to prohibit all new offshore drilling and view Big Oil in apocalyptic terms.

* The Pragmatic Camp, of which I am a part, that is made up of people who acknowledge that reliance on finding new sources of oil in the Gulf is necessary in the short term, that there have been relatively few spills over the years, but want to keep Big Oil on a short leash while Washington pushes hard to develop alternative energy development.

As awful as the 130-mile-wide slick is, it should be kept in mind that the nearly 12 million gallons of oil that have bellow from the ocean floor since the Deepwater Horizon burned and crashed, taking an already forgotten 11 lives, is tiny compared to the largest spills.

That so noted, it is even more important to keep in mind that the disaster is one of those (I hate the term) teachable moments, in this instance an opportunity to reverse the long slide of American environmentalism as a political force and mete out punishment to BP beyond the drubbing that its share price has taken.

But the big lesson -- yet again -- is that as extraordinary as our planet is, it cannot take care of itself.

Photograph by Joe Raedle/Getty Images
Posted by Shaun Mullen at 12:30 AM
Email ThisBlogThis!Share to TwitterShare to FacebookShare to Pinterest

You know, I've never understood what it is about a deep, informed, pessimistic view of humanity's ecological impacts that makes one "rabid". "Gloomy" -- I'll buy that. "Enraged" -- well, yes. I hate to see beautiful, irreplaceable places I've loved destroyed by those who never understood or even saw what they trampled underfoot.

OK, what the hell. If this is rabid, I'm foaming at the mouth:

"One of the penalties of an ecological education is that one lives alone in a world of wounds. Much of the damage inflicted on land is quite invisible to laymen. An ecologist must either harden his shell and make believe that the consequences of science are none of his business, or he must be the doctor who sees the marks of death in a community that believes itself well and does not want to be told otherwise."
Aldo Leopold, _Round_River_