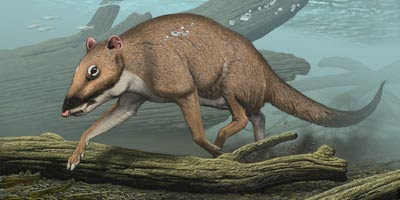 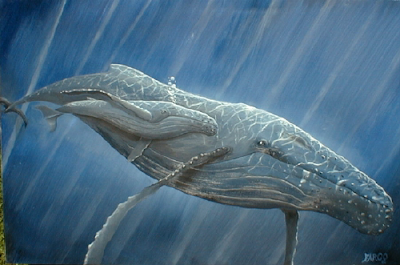 SMALL INDOHYUS WAS AN ANCESTOR OF THE WHALE

If you were hacking around southern Asia 50 million years or so ago, you might have seen a small critter walking on slender legs tipped with hooves. Indohyus (literally "India's pig") was a land dweller, but at the first sign of danger it took to the water where it waded to safety.

According to molecular evidence, the closest living relatives of whales and dolphins surprisingly are even-toed ungulates called artiodactyles. These are hoofed mammals that include deer, cows, sheep, pigs, giraffes, camels and hippos, but incredibly the Indohyus is the earliest known relative, an assertion that has now been bolstered by scientists from Northeastern Ohio Universities who studied the most complete skeleton yet found.

Indohyus, a small animal about 28 inches long, was a member of a family of mammals called the raoellids, prehistoric artiodactyls that lived at the same time as the earliest whales and also were from southern Asia. By analysing a fossilized skull and limbs collected from India, research team leader Hans Thewissen found compelling evidence that the raoellids were a sister group to the ancestors of whales.

"Even though Indohyus had the elegant legs of a small deer and walked around on hooves, it also had features found only in modern and fossil whales. Its jaws and teeth were similar to those of early whales, but the best evidence was the presence of a thickened knob of bone in its middle ear, called an involucrum. This structure helps modern whales to hear underwater, is only found in whales and their ancestors, and acts as a diagnostic feature for the group."

Based on these physical similarities, Thewissen suggests that the raoellids are a sister group to whales and both groups are evolutionary cousins to all modern artiodactyls.

Indohyus's skeleton also suggests that it was partially adapted for life in the water. Its leg bones were unusually thick, a feature shared by other aquatic animals including hippos, sea otters and manatees that prevent them from floating by default, allow them to hang in the water and dive more easily.

Thewissen's portrait of Indohyus reveals that the changes that propelled the evolution of whales did not involve a move to water. This is because whales and raoellids are evolutionary sisters and since early members of both groups were happy in the water, aquatic lifestyles must have pre-dated the origin of whales.

"The key step was a switch in diet. Thewissen speculates that whales developed from an Indohyus-like ancestor that fed on plants and possibly small invertebrates on land, but fled to water to escape predators. Over time, they slowly turned into meat-eaters and evolved to swim after nimble aquatic prey.