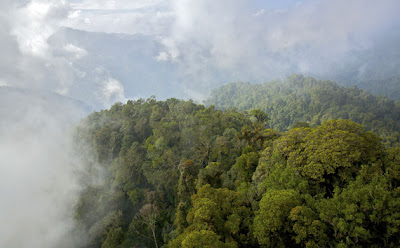 The mist-shrouded Foja mountains of Indonesian New Guinea have long fascinated scientists because of the stunning diversity of flora and fauna and absence of people,

and the region is a Garden of Eden that keeps on giving. A recent expedition found an amazing array of new species, including a tree frog with a nose like Pinocchio, a huge woolly rat that is tame, a gargoyle-like gecko and a tiny wallaby that is the smallest documented member of the kangaroo family.

"While animals and plants are being wiped out across the globe at a pace never seen in millions of years, the discovery of these absolutely incredible forms of life is much needed positive news," said Bruce Beehler, a senior research scientist with Conservation International who took part in an expedition jointly sponsored with National Geographic.

"Places like these represent a healthy future for all of us and show that it is not too late to stop the current species extinction crisis."

The Foja mountains, located in the Indonesian province of Papua on the island of New Guinea, cover an area of more than 40,000 acres of unroaded, undeveloped and undisturbed rainforest. The region is a productive species generator because of its relative isolation, elevation and tropical environment.

The expedition, which took place in November 2008, is the third of its kind since 2005.

"The Foja mountains are a virtual island where species have evolved for millennia," said John Francis, NG's

The conservationists are highlighting the new discoveries to encourage the government of Indonesia to bolster long-term protection of the area, which is a national wildlife sanctuary.

The Guardian describes the discoveries thusly:

"The tree frog, found sitting on a bag of rice in the campsite, has a Pinocchio-like protuberance on its nose that points upwards when the male calls, but deflates and points downwards when he is less active.

"Other discoveries recorded during the survey included a new blossom bat, which feeds on rainforest nectar, a small new tree-mouse, a new black and white butterfly related to the common monarch, and a new flowering shrub.

"In addition to the new kangaroo-related dwarf wallaby, scientists obtained the first photographs of a free-ranging individual of the extremely rare golden-mantled tree-kangaroo, which is critically threatened by hunting in other parts of New Guinea. They also spotted a pair of new imperial pigeons with rusty, whitish, and

"The biologists on the expedition, including scientists from Indonesia, endured torrential rainstorms and life-threatening flash floods, which saw rivers swell by more than two metres [over 5 feet] in less than 30 minutes, as they tracked species from the low foothills to the top of the range, at an altitude of 2,200 metres [7,200 feet]. Poor weather made helicopter journeys haphazard, which left the scientists short of food and forced to journey by foot."

There is a sobering backdrop to the discoveries: Reports show that world governments have failed to reduce the rate of loss of biodiversity.

To help stem the losses, Conservation International said it intended to double or

triple the number of species discovered over the next few years through collaborations to allow scientists to visit more unexplored places.

Many new species may help benefit human health or help protect food and fresh-water security, CI said, and could prove important for conservation.