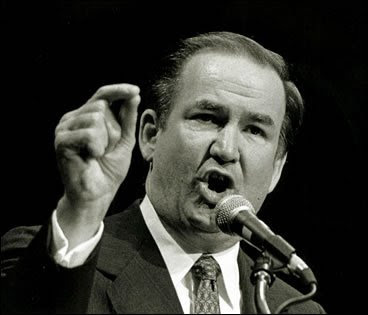 The 72-year-old Buchanan was a senior adviser to Presidents Nixon, Ford and Reagan and a three-time presidential candidate himself. He also is the author of junk histories, a syndicated columnist and co-founder of The American Conservative magazine.

Buchanan's oxygen is making outrageous statements in print and on the air. He argued in a recent book that Britain should not have declared war on Nazi Germany (seriously) and then on the air the other day declared that with the likely confirmation of Elena Kagan there will be too many Jews on the Supreme Court (seriously).

Said Buchanan on MSNBC, where he has a regular paying gig:


Indeed, of the last seven justices nominated by Democrats JFK, LBJ, Bill Clinton and Barack Obama, one was black, Marshall; one was Puerto Rican, Sonia Sotomayor. The other five were Jews: Arthur Goldberg, Abe Fortas, Ruth Bader Ginsberg, Stephen Breyer and Elena Kagan. If Kagan is confirmed, Jews, who represent less than 2 percent of the U.S. population, will have 33 percent of the Supreme Court seats. Is this the Democrats' idea of diversity?

But while leaders in the black community may be upset, the folks who look more like the real targets of liberal bias are white Protestants and Catholics, who still constitute well over half of the U.S. population.

It is tempting to try to respond to Buchanan with . . . er, the facts.

Like the fact that it is highly unlikely that he complained over the many years that the high court was overwhelmingly white and male although half of the population was female and that blacks were a sizable minority. Was that Buchanan's idea of diversity? Or that his beloved Republican Party slides further and further from representing the American demographic with every election cycle.

But that would be a waste of time.

Frank Bell nails it at From Pine View Farm:

I have a friend, my once and again best friend, whose father was saved from Auschwitz by Raoul Wallenberg. She still has copies of the paperwork that saved her father’s life.

Had his life not been saved, she would not have been born and I would have missed her friendship.

Is she one too many for Pat Buchanan?

Is there a depth of bigotry and prejudice that the Republican Party and its supporters are not willing to plumb?

As Frank and I have discussed, Buchanan's latest anti-Jewish screed also hits awfully close to home for me. My name notwithstanding, I have deep Jewish roots and three members of my families died at Auschwitz and another death camp.

How ironic that my grandfather David Snellenburg, who is responsible for lighting and stoking my journalistic fires, emigrated to America as a young man (arriving with 12 cents in his pocket) in order to escape the deep prejudice he encountered in Germany.

Granddaddy was proud of his adopted country and printed at his own expense copies of the Declaration of Independence and Constitution that he distributed to public school civics classes. He rallied the leaders of the major denominations in his adopted city to raise money to bring Jewish refugee children to the U.S. (The Catholic diocese declined, but that's another story.)


He would have been deeply offended by Buchanan, of course, but would have argued that it was his right to spew such hate even if Granddaddy was one too many Jew for him. And like Frank would have regretted MSNBC dropping him because he does us all a service for being a poster boy for the hate that is out there.
Posted by Shaun Mullen at 12:10 AM
Email ThisBlogThis!Share to TwitterShare to FacebookShare to Pinterest