When Legal Tribalism Trumps All: Why Ivy League Law Schools Are A Disgrace 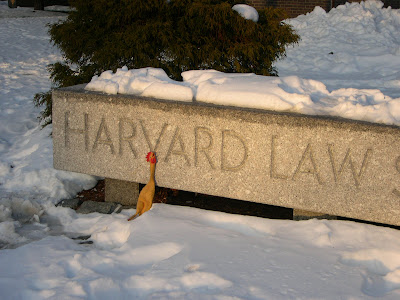 This helps explain why a goodly number of conservative legal academics, among them Stephen Bainbridge, Eugene Volokh and Charles Fried, are downright enthusiastic about Kagan or at least don't oppose her. Paul Campos correctly notes that this is because of legal tribalism. In other words, Kagan is one of their tribe and that trumps ideological differences.

Campos casts this tribalism in a less than flattering light because, in his view and mine, legal academia is vapid, getting tenure is a snap, professors can get away with publishing little, and what they do publish is not subject to peer review as is the case with many other disciplines.

Now that we've established that the lofty towers of legal academia are exercises in back scratching, let's move on to the main event.

I acknowledge that to an extent we're talking apples and oranges here.

A direct line cannot be drawn from the hallowed halls of Harvard Law to lawyers who roll elderly widows, a capital punishment system that ices blacks and other minorities far out of proportion to whites, that being able to afford a big-shot lawyer considerably increases your chances of walking, and the Constitution is too often treated not as the bedrock of our legal system but as an instrument that is to be ignored when it is an inconvenience and twisted out of shape when it can't be ignored?

Shouldn't Harvard Law and its ilk be setting the standard in real-world legal scholarship, legal accountability and legal reform and ethics? Of course they should, but as the search through Kagan's academic record shows, Harvard Law might as well be called La La Law.

I am of the opinion that the Supreme Court is setting itself up for a legal challenge, as to whether or not 1) their opinions are in fact biased due to their common Ivy League education, and 2) they are engaging in discrimination, by limiting the Court to Ivy League Graduates.

The following applies to Kagan, just as it did to Sotomajor.

This editorial was created by 160 Associated Press readers under a Creative Commons Share-Alike Attribution License 3.0 using MixedInk's collaborative writing tool. For more about how it was created, see here. It can be republished only if accompanied by this note.

Sotomayor does not offer true diversity to our Supreme Court. The potential power of Sotomayor's diversity as a Latina Woman, from a disadvantaged background, loses its strength because her Yale Law degree does not offer educational diversity to the current mix of sitting Judges. Once she walked through the Gates of Princeton and then Yale Law School she became educated by the same Professors that have educated the majority of our current Supreme Court Justices, and our Presidents.

Diversity in education is extremely important. We need to look for diversity in our ideas, and if our leaders are from the same educational background, they lose the original power of their ethnic and gender diversity. The ethnic and gender diversity many of our current leaders possess no longer brings a plethora of new ideas, only the same perspective they learned from their common Ivy League education. One example of the common education problem is that Yale has been heavily influenced by a former lecturer at Yale, Judge Frank, who developed the philosophy of Legal Realism. Frank argued that Judges should not only look at the original intent of the Constitution, but they should also bring in outside influences, including their own experiences in order to determine the law. This negative interpretation has influenced both Conservatives and Liberals graduating from Yale. It has been said that Legal Realism has infested Yale Law School and turned lawyers into political activists.

A generation of appointees with either a Harvard or Yale background, has the potential to distort the proper interpretation of our Constitution. America needs to decentralize the power structure away from the Ivy League educated individual and gain from the knowledgeable and diverse perspectives that people from other institutions can provide. We should appoint Supreme Court Justices educated from amongst a wider group of Americas Universities.

The Presidents we have elected for the last twenty years, have themselves been Harvard or Yale educated. This has the potential to create an even more closed minded interpretation of our laws.

When we consider that our Nation has potentially twenty - eight years of Presidential influece from these two Universities, as Americans, we should look long and hard at the influence Yale and Harvard have exerted on our nation's policies. Barack Obama promised America Change, but he has continued the same discriminatory policy by appointing a Yale graduate over many qualified candidates that graduated from other top Colleges and Universities in America.