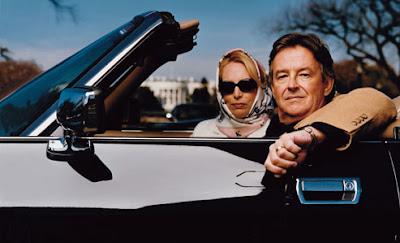 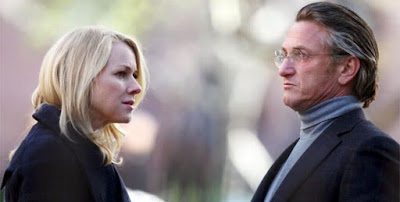 PLAME AND WILSON, WATTS AND PENN
Fair Game, a film about Valerie Plame and Joseph Wilson starring Naomi Watts and Sean Penn, debuts today at the Cannes Film Festival. The flick is based on the eponymously titled book by Plame, whose identity as a CIA operative was leaked to the media by White House bigs after her husband, a former ambassador, cast doubt on the Bush administration's claims that Saddam Hussein sought to buy uranium in Africa. Herewith a post from May 2007 on the whole sordid affair:

The right-wing punditocracy has blathered on ad nauseam that Valerie Plame could not have been outted because she was not a covert CIA employee, and therefore the Plame-Wilson leak scandal is nothing more than a mere drip.

Never mind that dancing on the head of this particular pin did nothing to obscure the ferocity with which Vice President Cheney, Karl Rove and their handmaidens pushed back after Mr. Valerie Plame – aka former career diplomat Joseph Wilson – published an op-ed piece in The New York Times debunking a key lie in the Bush administration’s rationale for talking the U.S. to war in Iraq.

Anyhow, while I was watching a Seinfeld rerun or something the other night, NBC News reported that a newly declassified summary detailing Plame's work history at the spy agency shows that she was indeed "covert" when her name was leaked to syndicated columnist and Bush sycophant Robert Novak in July 2003, setting in motion a series of events that climaxed with the conviction of Cheney chief of staff I. Lewis “Scooter” Libby.

The summary states that:

"Ms. Wilson was a covert CIA employee for who the CIA was taking affirmative measures to conceal her intelligence relationship to the . . . .

"While assigned to CPD [Counterprofileration Division], Ms. Wilson engaged in temporary duty (TDY) travel overseas on official business. She traveled at least seven times to more than ten countries. When traveling overseas, Ms. Wilson always traveled under a cover identity — sometimes in true name and sometimes in alias — but always using cover — whether official or non-official cover (NOC) — with no ostensible relationship to the CIA."

The summary was among the attachments to a memorandum from Special Counsel Patrick Fitzgerald to the court recommending that Libby spend 2½ to 3 years in the slammer for obstructing his leak investigation and then lying about it.

WHY DOES THIS MATTER NOW?
Certainly not because it will result in clarifications, let alone apologies, from the talking heads who have ceaselessly criticized Plame and Wilson. In fact, the sight of grown men doing grand jetés around the news that Plame was indeed covert is interesting in and of itself.


No, it matters because it is a key to the success of a second trial -- the civil trial on the lawsuit that Plame and Wilson have filed against Cheney, Libby, Karl Rove and Richard Armitage.

The lawsuit would have proceeded no matter the outcome of the Libby criminal trial. That is because it is not about whether Libby obstructed justice and lied, both of which he did with abandon, but whether the high-profile defendants violated the constitutional rights of Mr. and Mrs. Plame-Wilson by conspiring to retaliate against them after 's Times piece.

Plame and Wilson are asking for unspecified monetary damages for what they describe as a "gross invasion of privacy" that could jeopardize the safety of their children and target Plame -- whom we now know was indeed covert -- for retribution by enemies of the U.S. They also allege that the incident has impaired their professional opportunities.

The same blabbermouths who have dissed Plame call the civil suit "an alternative version of reality" and worse, but it is not going to be wished away.

Although the analogy is less than perfect, the O.J. Simpson criminal and civil cases help explain why the suit could be so damaging.

Under the rules of criminal procedure, Simpson could be found guilty at his criminal trial only if the evidence showed beyond a reasonable doubt that he was the murderer. Largely because of an inept prosecution, the jury did have doubts and Simpson walked.

Under the rules of civil procedure, Simpson could be found guilty at his civil trial on a lawsuit brought by the families of the victims if there was merely a preponderance of evidence that he was responsible for the murders. The jury found there to be more than enough evidence, Simpson was found guilty and ordered to pay the families $33.5 million.

The same test will apply to a Plame-Wilson civil trial and the defendants, if found guilty, would have to pay the plaintiffs big bucks for violating their civil rights. No jail time would be involved.

DISCOVERY WILL BE A BITCH
But it will be the run-up to a civil trial that could be even more problematic for Cheney and his posse than the trial itself. I am fond of saying that "discovery will be a bitch" in my sometime role as a legal consultant and for good reason because that often is where the most blood is spilled.

Discovery is the process in which attorneys obtain information before trial through demands for documents, depositions of the plaintiffs and potential witnesses under oath and written interrogatories. Under the law, that process is pretty much wide open on the theory that both sides have a right to go to trial with as much knowledge as possible and that no side should be able to keep secrets from the other.

All of this begs the question of whether there will be a trial.

In November, the defendants filed a motion to dismiss the suit on the grounds that their positions as high-level government employees protect them from prosecution and, even more unbelievable, that outting Plame was within the scope of their responsibilities.

In other words, they were just doing their jobs. And besides which, they're above the law.

A ruling is expected on the motion in the next 30 to 60 days and I would not be so rash as to predict what the court will do.

But my gut tells me that the suit will proceed to discovery and then to trial if there is not a whopper of an out-of-court settlement. That is if Plame and Wilson would even accept one.

The plaintiffs are not particularly sympathetic characters.

has been especially self aggrandizing as he and the missus rattle the tin cup at fundraisers, but that won't matter when a jury is confronted with the spoils of discovery and the harsh reality of what rotten sons of bitches have run the for the last six-plus years.

POSTSCRIPT: My gut told me wrong. The suit never made it to discovery, let alone trial, while Libby was pardoned by President Bush.