Marsalis: Our Cultural Decline Based On Valuing Commercial Success Over Quality 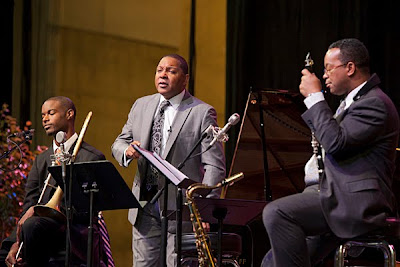 If any of the 1,500 or so people who filed into the Bob Carpenter Center at the University of Delaware last night expected to hear a concert by the Wynton Marsalis Quintet, they were bound to be disappointed. Or perhaps not. Because the noted jazz trumpeter, composer and music educator delivered a soaring lecture that wrote large why the revolutionary spirit of the Founding Fathers lives on in the truly American art forms of jazz, blues and swing.

If only we would listen.

"In the last 50 years, we've looked everywhere to correct our cultural decline except in the most obvious of places, the center of our real lives," Marsalis declared in evangelical terms, the stage his pulpit and the members of the quintet his choir. "Our internal lives and those of our students are under relentless assault by an increasingly crass entertainment industry that routinely confuses commercial success with quality."

The arts, Marsalis noted, offer a purpose-built solution to this situation by providing a time-tested blueprint based on class, creativity, confidence and competence. That is to say American music is classless, and germinated and grew because of the creativity, confidence and competence of its progenitors and their disciples, of whom the Pulitzer and National Medal of the Arts honoree is one.

"Before we sang, we spoke; before we danced, we walked; before we wrote, we told stories; and before we told those stories, we lived," Marsalis said. "Such songs and dances allow us to speak to one another across generations. They also give us an understanding of our commonality."

Marsalis was lavish in spreading the praise around, acknowledging the greatness of Buddy Bolden, Charlie Parker, Dizzy Gillespie, Thelonious Monk, Benny Goodman, Fletcher Henderson and Louis Armstrong, although he noted in an aside that while Goodman was the first white leader to integrate his band, he threw his black musicians under the bus when it came time to tour the South.

But he was equally harsh in noting that Americans "have forgotten" how to dance except in the corners of dark rooms, and in rewarding commercial success over quality have come to embrace the drum machine and forget about the real drum, while music education is all but an afterthought in an increasing number of schools.

Although not always commercially successful, let alone critically acclaimed, he said American creativity has found expression in the writing of Walt Whitman, Edgar Allan Poe, Herman Melville and the art of Winslow Homer.

"We're all from the same experience," Marsalis said. "Homer painted black folks with dignity, and Poe sang the blues before there was any blues."

Marsalis singled out Charles Joseph "Buddy" Bolden of New Orleans, widely recognized as at least a co-founder of jazz.

The lecture was interspersed with selections from the ethnically diverse quintet, which included Carlos Henriquez on bass, Ali Jackson on drums, Dan Nimmer on piano, Victor Goines in clarinet and sax, and Chris Crenshaw on trombone.

Photograph by Evan Krape
Posted by Shaun Mullen at 12:10 AM
Email ThisBlogThis!Share to TwitterShare to FacebookShare to Pinterest