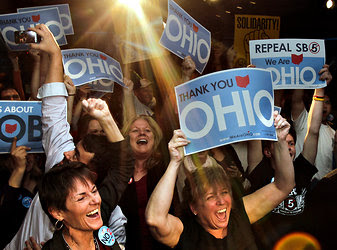 Analysts trying to gauge the mood of voters heading into 2012 based on the results of contentious ballot issues in yesterday's low turnout off-year elections should be forgiven if they awoke this morning with hangovers because from all appearances the Democrats defied expectations in beating back a Republican agenda that only one year ago had helped return control of the House of Representatives to the GOP.

The biggest victory came in Ohio where a law that restricted the right of public workers to bargain collectively was defeated by a 62 percent to 38 percent margin. But does the landslide victory -- a slap in the face to anti-union Governor John Kasich -- auger victories by President Obama and other Democrats in Ohio next year? With unemployment at 9.1 percent in the Buckeye Station and few jobs on offer, that is by no means a certainty.

In Mississippi, voters defied expectations and rejected a so-called personhood amendment to the state Constitution by a 59 percent to 41 percent margin. The amendment would have banned virtually all abortions and some forms of birth control by declaring a fertilized human egg to be a legal person. This was another setback for the Republican agenda but it is unlikely to have any impact in 2012 considering that Mississippi is among the reddest of red states.

In Maine, where Republicans had ended same-day registration at polling places as part of a nationwide effort to suppress voter turnout, voters voted to restore the practice by a 59 percent to 40 percent margin, while in conservative Arizona voters appeared close to turning out of office state Senator Russell Pearce, a Tea Party darling and the chief architect of the state’s controversial anti-immigration law.

There were few surprises in big city mayoral races despite the anger at Washington.

Meanwhile, in Montgomery County, a Philadelphia suburb crucial to Obama's victory in Pennsylvania in 2008, Democrats took control of the county commission for the first time in its history.

But the elections were less than a clean sweep for Democrats. While Ohio voters rejected the public employee union-busting measure, they approved a symbolic measure to exempt Ohio residents from the individual mandate required in Obama's health-care reform law.

Posted by Shaun Mullen at 7:03 AM
Email ThisBlogThis!Share to TwitterShare to FacebookShare to Pinterest

Virginia, a swing state that just got gerrymandered by the Democrats, had it Senate taken over by the GOP and the GOP took a 2/3rd majority in the House.