Letter From The Eastern Cape: 'God Drives Us To Life Street In A Big Taxi' 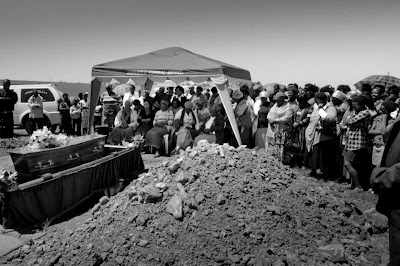 OLANA, A FIVE-YEAR-OLD DROWNING VICTIM, IS LAID TO REST

By SUSAN WINTERS COOK
I'm facing about 200 people I don't know and wondering how I will be able to deliver my message without choking up. I am the only white person at this funeral. That is the norm for my husband and me because only a minority of whites will venture into rural African communities. Thus we are treated like royalty, given seats at the front of the gathering, and asked to speak a few words. Knowing this I have been formulating my thoughts over the past few days but when faced with delivering them I feel myself overwhelmed by the tragedy that has brought me here.

The last village funeral we attended was almost joyous. I have never heard so much laughter at a funeral as tales were told about the elderly woman who had died of complications from diabetes. Her family was strong and well off by village standards and she had been popular.

This funeral is the opposite. Olana, a boy whose fifth birthday had been celebrated just six days earlier, fell into a dam near the house and drowned.

Nokwezi, the child's grandmother, has been a valued employee and companion off and on for 14 years. We call each other "Mama," a term of affectionate respect. She is known for her merry disposition, absolute reliability and as a devoted parent whose sole purpose in life has been to provide for her family. Olana and Tumeka, his temporarily unemployed mother, had been living with Nokwezi, her husband Vuyane and their other children. In my phone conversations with her since the drowning Nokwezi wept hard with grief as she also worried about how they could manage the cost of the funeral. As her employer, it is customary for me to provide some financial support. I also sent a load of firewood to them.

When looking for the location of a funeral one needs only to look for a large tent. It is set up adjacent to the house of the deceased and filled with chairs and benches. Close to the house women tend to very large cast iron pots over wood fires preparing a meal of meat, rice and local seasonal vegetables that will be served after the burial.

The casket is in front of the tent, covered with flowers. Inside the house the women of the family of the deceased sit in one room and the men in another. Prayers are said and songs are sung before they file into the tent to offer their last farewells before the top of the casket is closed.

The boy was beautiful and he was posed with one small hand next to his face. He could have been sleeping after a day of hard play.

Black African funerals are held on weekends to ensure that all may attend. They are usually lively with spirited preaching and spontaneous singing. They begin between 9 and 10 in the morning and go on until about 2 in the afternoon, which is the preferred time for burial. The attendees return to the house and dip their hands into a tub of water, a custom of washing away the death, just as the house is emptied, scrubbed and repainted inside and out.

Funerals played an important role in the struggle against apartheid. When all other gatherings were banned, funerals became the only opportunity the revolutionaries had to meet and speak their message. (I attended one funeral like that in 1992 during the turbulent transition years in the Eastern Cape. The man I was with spoke forcefully against the government troops who had assassinated the deceased by throwing a grenade at him on the front porch of his home. The next day my companion was informed that an assassination order had been put out on him. He spent the next two years on the run.)

Funerals continue to be major community events and now are a barometer of the impact of HIV/AIDS, which hovers at nearly 10 percent nationally and 9 percent here in the Eastern Cape.

The funerals are among the most social and expensive events a family will ever host, along with weddings and ancestral rituals. They are big business and most people carry some kind of funeral plan if they can afford to. The unexpected death of a child like this can spin a family into financial hardship for a long time.

A child's death carries an underlying message of failure. It's a reminder of just how treacherous the world of a child is, even in a peaceful and coherent rural community. It's also a reminder of how powerless we really are when forces collide and become an explosion we call an accident.

The Eastern Cape has dismal child mortality figures. Until recent the rate was nearly twice the national average of 43 deaths per 1,000 of children under the age of five. In 2010 it was 57 per 1,000. Last year stories of the high number of infant deaths in government hospitals shocked the province and 800 health department employees have been sacked for theft or failure to perform their duties.

The unemployment rate in the Eastern Cape is 60 to 80 percent. Most households rely on government grants and whatever earning a family member may bring or send home. Fewer households are growing their own food, a widespread practice in past generations, while the reliance on cheap commercially produced foods that are high in fat, sugar and processed ingredients creates a different kind of malnutrition. A local shopkeeper told me that his customers now buy more white flour than the traditional staple cornmeal.

Nokwezi's family is one in which a child thrives.

They are diligent about health care, school fees and they grow their own food. There was no neglect involved in this accident. Children play outside and explore their environment. But unlike coastal beaches that are closely monitored by lifeguards, village water sources -- rivers, dams and streams -- are not fenced or watched. Few residents know how to swim. It's a proven recipe for tragedy.

Although statistics show the incidence of child mortality plunges to a much lower rate when a child turns five, and does not increase again until the age of 15, the probability that a boy will die in a drowning nearly quadruples once he has reached the age of five.

I know that Nokwezi and her family are staunch believers in God and that goes most of the people in the tent. I also know there are underlying currents of traditional believes -- witchcraft, deadly spells, angry ancestors and a vindictive God.

My message is design to suggest that, because this is a good family -- they obey God's laws, they work hard and they love their children -- and I believe that God loves us and does not hurt us. Accidents are something we simply cannot understand and it takes all the coping skills we have to be able to accept them. I do this softly with a story in which God drives us to Life Street in a big taxi and drops us off there to do the best we can with the tools we have been given. Nokwezi's brother translates for me.

The police have indicated that they will take the family to a social worker, but I suspect that will not happen. There are far too few social workers available to be able to manage the case load. I make some phone calls and find someone who does free counseling for Compassionate Friends. I'll take Nokwezi and her family for the first visit.

They were all there when the police divers arrived some hours after Olana was reported lost and retrieved his body from the water. This promises to be a hard year for them. 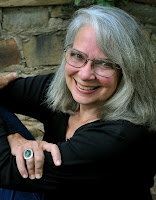 Cook's profile of a regional African National Congress leader's struggle to survive transitional political violence won the prestigious 1994 Robert F. Kennedy Journalism Award. From 1997 to 2003, Cook produced an AIDS education periodical for the province, has produced documentaries for the provincial premier and a documentary about a Cape Town squatter community building its own housing.

Cook recently published Nozuko' Story: The Story of an African Family. Click here for her initial Letter From the Eastern Cape.

All photographs copyright Susan Winters Cook
Posted by Shaun Mullen at 12:10 AM
Email ThisBlogThis!Share to TwitterShare to FacebookShare to Pinterest

a beautiful horrible story. May all be comforted by kin here and beyond. Just heart-rending. Thanks Shaun for running it.