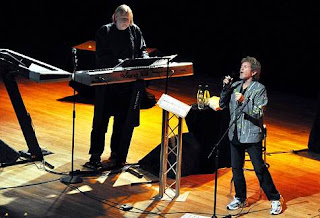 Many of rock 'n' roll's legends get better with age. Guitar gods Jeff Beck and Eric Clapton are playing better than ever. Bonnie Raitt, too. Which bring us to vocalist-acoustic guitarist Jon Anderson and keyboard virtuoso Rick Wakeman, two members of the original Yes.

Anderson and Wakeman aren't Yes, of course, but like fine wine that has been down in the cellar for more years than you can remember, the blends of progressive, art and symphonic rock they play sound better than ever. The duo performed two sets on Saturday night at the packed Sherman Theater, a former vaudeville house in Stroudsburg in Northeastern Pennsylvania, the first an hour in length and the second a robust hour and 15 minutes with three encores.

The evening began with "Starship Trooper" and ended with "Roundabout," two Yes classics. Much of the show consisted of pared down Yes songs, a necessity with only Anderson's distinctive upper register voice and acoustic guitar and Wakeman's electric piano and synthesizer. But I didn't miss the full Yes ensemble with electric guitar, bass and drums; great music is sometimes even greater when pared down.

Anderson and Wakeman interspersed Yes songs with selections from The Living Tree, an unusual album in that Wakeman wrote the music in his home studio north of London and sent it to Anderson in the form of MP3s to his studio in Costa del Sol, Spain, where he wove in the lyrics. The two never actually were in the same room until pre-tour rehearsals began.

Several of the selections from The Living Tree were treacly, which Anderson tends to be a bit too often, but "Living Tree (Part 1 and Part 2)," which is . . . uh, about the beauty and wisdom of trees, and "23/24/11," an anthem to a soldier counting down to the end of his tour in Iraq or Afghanistan, were powerful and lovely. As was their reinterpretation of Paul Simon's "America," which made the original seem pallid and the Beatles' "Every Little Thing."

But the crowd of fifty and sixtysomethings had packed the Sherman to the rafters, a few children and grandchildren in tow, to be transported back to the 1970s and the heyday of Yes, which had four consecutive gold albums, my favorite being the flawed but ultimately brilliant Tales from Topographic Oceans. Two or three notes into each Yes song and the crowd was on its feet.

Nostalgia tours can be problematic. Play songs from yesteryear exactly as they were recorded and something often is missing, at least to me. I want to hear how the artists have grown and reinterpreted, and in this respect Anderson and Wakeman not only didn't disappoint, they were a reminder about how great artists never stop growing and great songs never stop being great. (I had seen the Wynton Marsalis Quintet three days earlier and came away thinking the very same thing.)

I first heard Yes with Anderson and Wakeman in 1972, two years before Tales was released. The earth has gone around that big yellow disk in the sky nearly 40 times since then and our lives and our world have changed in ways we never could have imagined, some of them not necessarily good. (Anderson and Wakeman made references between several songs to the parlous state of things, notably man's blood thirst for making never ending war.)

And so whether "Starship Trooper," "Awaken," "Roundabout" or "Close to the Edge," Anderson and Wakeman transported us back to not necessarily a simpler time for one evening but at least a time when we were as one with the music.

I expected an enjoyable evening. Instead, to use a term of those times, I was blown away.

Thanks Shaun for your insightful, appreciative review of the delightful show at the Sherman. For this Yes veteran, it was a dream come true. I always thought Jon and Rick were the heart of Yes. The show at the Sherman proved it. Awaken was actually better without the drums and guitars...I should know. I saw the original tour!

You are quite welcome, Nancy. It was indeed a special night.

I was delighted to see your initial point -- one I've been making to anyone willing to listen to an old '60s casualty pontificate, that just as we revered the veteran blues guys like Muddy Waters, the Kings (B.B. & Albert), Junior & Buddy, etc., for their veteran skills and nuances, so it should be equally true that the best of 60s-70s rock heroes should be ever-so-much better with age, like fine wine.

That's why it really annoys me when the in-house music critic at the paper where I work gives all his attention to whatever's fresh & new while failing to advise a city with an admittedly aging population when its icons are in town. I recently saw Boz Scaggs deliver an astonishing set in an acoustically perfect theater, with no more heads-up on the show that his name appearing in the production company's ad banner listing the roster of upcoming acts.

While there are great new singer-songwriters and bands that are breaking the mold, most of the acts that I hear on indie stations that are described in breathless terms are utterly derivative.

Two examples: Daws, a band that is quite nice but, if you close your eyes, sound like Jackson Browne and his bands from the early 70s. Then there is Adele, who of course is red red hot but to my old ears is merely an adequate singer with mediocre material who cannot hold a candle to many of her forebears.