Absent A Blue Dress, What Does Cain Hve To Lose Besides His Credibility 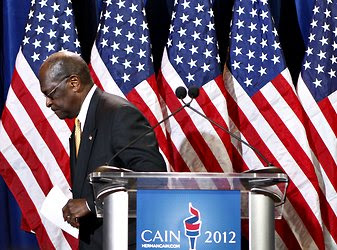 To say that Herman Cain has now completely made an ass of himself does a disservice to donkeys everywhere.

With one of the four women who have accused him of sexual harassment providing a detailed and credible account of Cain groping her in a parked car in the context of him offering her a job and a second woman about to go public with a detailed account because she is angered the Cain remains very publicly in denial, the Republican presidential wannabe has now shot himself in both feet and is working northward.

It has been 10 days since Politico broke the story of his adventures in philandering while president of the National Restaurant Association. Since then Cain has alternatively blamed that vast left-wing media conspiracy, Rick Perry, Mitt Romney and Democrats. That is, everyone but himself in about as an atrocious example of political damage control evah.

That Cain continues to deny that he even knew Sharon Bialek in the face of what she had to say at a press conference earlier this week is stunning.

Bialek, a former employee of the NRA’s educational foundation, stated that Cain approached her on the pretense of showing her the association’s offices. She said Cain parked his car and essentially assaulted her, slipping his hand under her skirt and trying to bring her head toward his lap. Bialek said that when she protested and reminded Cain that she had a boyfriend, he replied, "You want a job, right?"

It will only be a matter of time — and probably very little time as the rate Cain is immolating — before someone comes forward who has seen Cain and Bialek together, if not outright corroborating her account.

Cain’s other big problem at this point is that a scandal in the making that involved alleged victims with no names or backgrounds has mushroomed into a scandal with faces. One woman — and soon to be two and possibly three — who have names, employment records and children. This prompted Kathleen Parker to note in the Washington Post that in journalism, three is a trend and four is a tipping point.

In fairness to Cain (and I’m being way too generous here), perhaps he is an old-school type of guy who believes sticking one’s hand up a woman’s dress in an effort to grab her snatch is just being friendly and a little nooky in return for the promise of a job is the way business is done when you’re a big shot millionaire and former pizza magnate.

Besides which, there is no semen-stained blue dress, Cain’s supporters despise the messenger (the news media), his wife is standing by him, at least in public, so what’s to lose besides the most important thing a politician has — his credibility.

Posted by Shaun Mullen at 6:59 AM
Email ThisBlogThis!Share to TwitterShare to FacebookShare to Pinterest