With Paterno & Spanier Fired, The Demons Of Happy Valley Are Exorcised 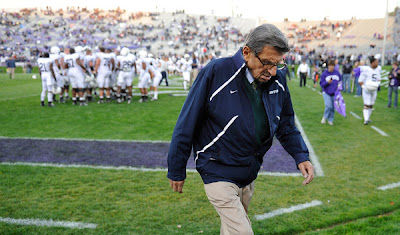 In a few short hours last night, the board of trustees of Pennsylvania State University exorcised demons that had haunted a campus fondly known as Happy Valley for 13 long years.

Legendary football coach Joe Paterno was fired outright despite his pleas to retire on his own terms after an extraordinary 62 seasons and more victories than any major college coach. University President Graham Spanier also was sacked.

The hasty departures of Paterno and Spanier followed the arrest last Saturday of Jerry Sandusky, Paterno's long time defense coordinator, on charges that he raped at least eight young men whom he met through his charity, some of them in the football team's locker room. Also charged was Athletic Director Tim Curley and Gary Schultz, the university vice president who oversaw the campus police force. Both had been aware of the rape allegations, while the campus police and a county district attorney conducted perfunctory investigations that went nowhere.

While the series of events were shocking, they also were a cautionary tale.

When Paterno became head coach in 1966, Penn State was a sleepy university best known for its agriculture school. The 23-year-old Brown University graduate quickly transformed the football program into a national powerhouse, winning 409 games, two national championships and innumerable bowl games. Penn State joined the Big Ten football conference in 1990, further raising its visibility. Beaver Stadium was repeatedly enlarged until it could seat 111,000 people, and on any given Saturday every seat was filled. The Nittany Lions became a national brand, the team a multi-million dollar profit center for the university, football a religion and Paterno it's high priest. 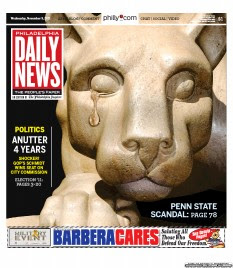 If all of that seemed too good to be true, it was. Although it became widely known that Sandusky was a pedophile and two janitors and a graduate assistant coach had witnessed him raping young men in separate locker room shower incidents, they did not report the incidents, possibly because Paterno had attained God-like status, arguably was more powerful than Spanier, and they feared for their jobs.

Spanier had been one of the longest-serving and highest-paid university presidents in the nation and helped raise the academic profile of Penn State during his tenure. When the announcement of the unanimous decision to fire Paterno and Spanier was made by John Surma Jr., the vice chairman of the board of trustees, at a late evening news conference, a gasp went up from the crowd of several hundred reporters, students and photographers.

"We thought that because of the difficulties that engulfed our university, and they are grave, that it is necessary to make a change in the leadership to set a course for a new direction," Surma said.

After the announcement, the news conference took on a vitriolic tenor. Angry questions were shouted at Surma and cameraman repeatedly declared, "Your campus is going to burn tonight."

About 2,000 students poured into the streets of downtown State College after the news conference to riot in favor of child rape complicity. (Okay, I'm being a little tough.) A few students climbed lampposts, tried to topple street signs and knocked over trash cans. Others set off firecrackers from the roofs of buildings, and a television news truck was flipped on its side. A lamppost was torn down and police pepper-sprayed some in the crowd.

It was board Chairman Steve Garban who in all likelihood delivered the coup de grace.

Garban had been among the group of trustees who, along with Spanier, twice visited Paterno in 2004 in an effort to get the aging coach to retire. Whether those efforts had any connection to the then simmering allegations against Sandusky is unclear.

Paterno flat out refused to go and was to coach seven more seasons despite now being 84 years old and suffering from several ailments. In recent years he has tottered up and down the sidelines at games or confined himself to a booth over the stadium, saying little and seemingly directing the team by mind melding.

Neither Paterno nor Spanier were charged in connection with the incidents, but it is obvious that they were aware of Sandusky's serial depravities and could have done much more.

In light of the fact that possibly dozens of people knew about Sandusky but were morally derelict, other heads are bound to roll.

These will likely include Curley and Shultz, who are at present being represented by university-paid lawyers, and McQueary who is now a full-fledged assistant coach whose career is probably now over, and possibly other coaches, administrators and trustees who may also have been aware of the allegations.

The scandal broke during the 20th anniversary week of Magic Johnson's announcement that he had contracted HIV, which took the disease out of the gay ghetto. If there is anything positive to come out of the scandal, it may be that child sexual abuse begins to get the attention it deserves.

Paterno's abilities as a motivator were legendary and his public face of moral rectitude admirable, especially considering that too many of his major college head coach peers are dirtbags. He stressed academics and Penn State was always near or at the top for NCAA Division I graduate rates. He donated $5 million to finish the university's fine library and always made time to chat with the students whom he encountered on campus.

Then again, it is unlikely that even one parent who attended Penn State would hesitate to trade decades of victories for a guarantee that their child wasn't a victim whom Paterno ignored.

"I am disappointed with the Board of Trustees' decision, but I have to accept it," he said, seemingly still oblivious to his central role in the worst college football scandal in many years. "A tragedy occurred, and we all have to have patience to let the legal process proceed. I appreciate the outpouring of support but want to emphasize that everyone should remain calm and please respect the university, its property and all that we value."