Key Advisors Are Abandoning Cain Over His Flubs, Not Harrassment Allegations 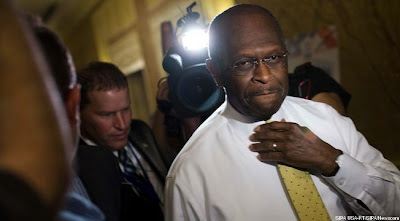 The beleaguered Herman Cain, who never had much of a campaign staff, is losing the backing of key conservative advisers who were providing him with free positive press and were fundraising conduits.

Talking Points Memo reports that these powerful voices — ranging from Mike Huckabee to Sean Hannity and Laura Ingraham -- are privately expressing concern about a man they once praised, but less because of the sexual harassment allegations against him than repeated flubs on Libya and other foreign policy matters that have revealed him to be an ignoramus.

Meanwhile, every new revelation about Cain’s extra-marital dalliances has provoked increasingly bizarre responses from the Republican president wannabe, but his pushback against Ginger White’s detailed and credible account of her 13-year affair with him may represent the last nail in the coffin of a man who never could be taken seriously.

Even the candidate seems to realize this with The New York Times, among other media outlets, reporting that he told members of his staff in a conference call on Tuesday morning that he was reassessing whether to proceed and would make a decision in the coming days. As it is, the first crucial primary-season votes will be cast at caucuses in Iowa on January 3, which is less than five weeks away.

Cain had entered the campaign with the wind at his back. His unconventional and anti-Washington views captured the imagination of some Republican voters, but he has plummeted further and further in the polls with each new allegation and revelation.

White, who blabbed to an Atlanta television station, is not claiming that Cain harassed her as have four other women. In fact, she described their affair in terms of a romance and said that she only came forward after seeing how Cain has treated the other women who have accused him of harassment.

"It was pretty simple," White said of their relationship, which she hinted was sexual. "It wasn’t complicated. I was aware that he was married. And I was also aware I was involved in a very inappropriate situation, relationship."

Cain's response was that he was just trying to help the woman financially, an alibi first strutted out when Sharon Bialek, a former employee of the National Restaurant Association's educational foundation, stated that Cain approached her on the pretense of showing her the association’s offices but parked his car and essentially assaulted her, slipping his hand under her skirt and trying to bring her head toward his lap. Bialek said that when she protested and reminded Cain that she had a boyfriend, he replied, "You want a job, right?"

Asked directly by CNN's Wolf Blitzer, "Was this an affair?" Cain responded, "It was not," yet again calling to mind Bill Clinton's classic assertion that "I did not have sexual relations with that woman . . . Monica Lewinsky."

Cain's response was effectively undercut by his lawyer, L. Lin Wood, who said "This appears to be an accusation of private, alleged consensual conduct between adults -- a subject matter which is not a proper subject of inquiry by the media or the public."

A number of pundits have opined that consensual affairs are private affairs. But wasn't that exactly the case with Clinton and Lewinsky? And isn't Cain just another political hypocrites, more often Republicans than not, who blather about the sanctity of marriage while living shadow lives?