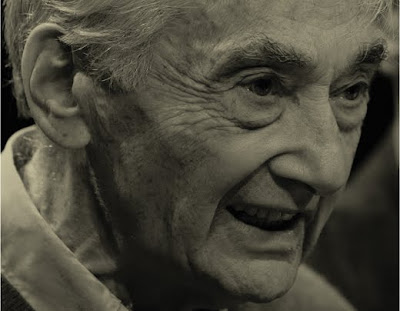 Excerpts from Howard Zinn's commencement address at Spelman College in Atlanta on May 15, 2005, where he had taught in the early years of the civil rights movement:

I want to remind you that, fifty years ago, racial segregation here in the South was entrenched as tightly as was apartheid in South Africa. The national government, even with liberal presidents like Kennedy and Johnson in office, was looking the other way while Black people were beaten and killed and denied the opportunity to vote. So Black people in the South decided they had to do something by themselves. They boycotted and sat in and picketed and demonstrated, and were beaten and jailed, and some were killed, but their cries for freedom were soon heard all over the nation and around the world, and the President and Congress finally did what they had previously failed to do -- enforce the 14th and 15th Amendments to the Constitution. Many people had said: The South will never change. But it did change. It changed because ordinary people organized and took risks and challenged the system and would not give up. That's when democracy came alive.

I want to remind you also that when the war in Vietnam was going on, and young Americans were dying and coming home paralyzed, and our government was bombing the villages of Vietnam -- bombing schools and hospitals and killing ordinary people in huge numbers -- it looked hopeless to try to stop the war. But just as in the Southern movement, people began to protest and soon it caught on. It was a national movement. Soldiers were coming back and denouncing the war, and young people were refusing to join the military, and the war had to end.

The lesson of that history is that you must not despair, that if you are right, and you persist, things will change. The government may try to deceive the people, and the newspapers and television may do the same, but the truth has a way of coming out. The truth has a power greater than a hundred lies. I know you have practical things to do -- to get jobs and get married and have children. You may become prosperous and be considered a success in the way our society defines success, by wealth and standing and prestige. But that is not enough for a good life.

Veterans of the Civil Rights Movement -- Against Discouragement

Those years at Spelman were the most exciting of my life, the most educational certainly. I learned more from my students than they learned from me. Those were the years of the great movement in the South against racial segregation, and I became involved in that in Atlanta, in Albany, Georgia, in Selma, Alabama, in Hattiesburg, Mississippi, and Greenwood and Itta Bena and Jackson.

I learned something about democracy: that it does not come from the government, from on high, it comes from people getting together and struggling for justice. I learned about race. I learned something that any intelligent person realizes at a certain point -- that race is a manufactured thing, an artificial thing, and while race does matter (as Cornel West has written), it only matters because certain people want it to matter, just as nationalism is something artificial. I learned that what really matters is that all of us -- of whatever so-called race and so-called nationality -- are human beings and should cherish one another.


Posted by Shaun Mullen at 12:08 AM
Email ThisBlogThis!Share to TwitterShare to FacebookShare to Pinterest