The Humanitarian Crisis In Haiti: Cries Of The Trapped Have Begun To Soften 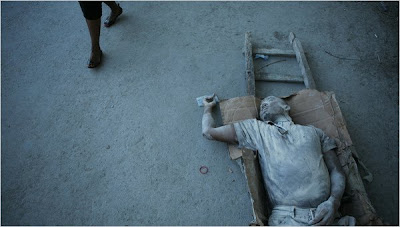 There is not a lot to offer about the extraordinary humanitarian crisis in Haiti that others are saying better and more knowledgeably, but herewith are some odds and

* Things are going to get worse -- much worse -- before they get better.

* Those "thousands" of U.S. troops being rushed to the island to help in relief efforts are actually only 5,000 or so Army and Marine regulars. Those services are severely overextended because of Afghanistan and That Other War.

* Any gesture involving Cuba that did not involve a middle finger would have been unthinkable during the Bush administration, but folks by the names of Barack Obama and Hillary Clinton have gotten Havana to agree to allowing U.S. relief flights in its airspace, which shortens

the trip to Haiti by 90 minutes.

* The blame game is in full gear and most of it is overwrought. That noted, humanitarian assistance to Haiti was slashed by the Bush administration, which also blocked international loans, ruined tens of thousands of small farmers, and in its spirit of outsourcing anything that's not nailed down, bypassed the government with private non-governmental organizations.

* The last outside intervention came in 2004 when president turned despot

Jean-Bertrand Aristide was ousted. He is now threatening to return from forced exile in South Africa.

* I recommend this David Brooks column in the NYTimes as a crash course on why Haiti was in such dire straits before the earthquake.


* That sound of one hand clapping is for the Robertsons, Limbaughs and other right-wing darlings, as well as Fox News talk-show hosts, most of whom are doing

virtually nothing on the catastrophe. After all, Scott Brown is the story of the hour.

* Fundraising is on track to break records set after Hurricane Katrina and the 2004 Asian tsunami, but scammers abound.

* By all means contribute relief money, but do not give it to the American Red Cross, an organization with a long track record of being corrupt. I myself would recommend the Mennonite Central Committee.