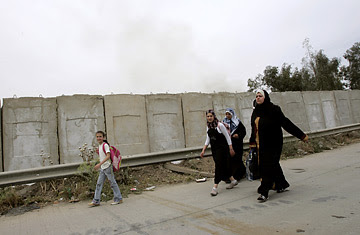 The walls the American military planned to erect in seemed like a simple solution to a deadly problem: Sunni and Shiiite enclaves would be physically separated, preventing each side's fighters from attacking the other's civilians. But simple solutions tend to fall apart when confronted with 's complicated reality.

Walls, if they worked, might serve the overriding American interest of halting 's sectarian war long enough for the to declare victory and bring home its troops. But neither the Sunnis nor the Shiiites want to halt the war — they want to win it. Barriers designed to lock in the status quo were bound to provoke opposition in both communities.

As Bush gave his manifestly inaccurate defense of Gonzales, Gen. David Petraeus sat silently next to him, his newly minted fourth star on his shoulder and his hands folded in his lap. He is the intelligent, ambitious officer the White House has selected as the front man for its endgame strategy in . One can only wonder what Petraeus was thinking as he watched the president circle the wagons ever tighter around his embattled White House.

Something's got to give. That's the sense around this week as the news from worsens and the president defiantly continues an policy that many military leaders question. Unfortunately, what's giving way right now is the national interest.

Pat Tillman was a hero not because of how he died but because of how he lived, eschewing a huge contract with the Arizona Cardinals of the NFL to enlist following 9/11. And Jessica Lynch’s heroism is the heroism of hundreds of thousands of young Americans who have answered the call to serve a purpose higher than themselves and enlist in the armed forces. She also endured her injuries and capture with a singular stoicism while remaining true to her fallen friends and comrades in arms.

Isn’t this enough for the myth makers in the Pentagon? The American people today are much more sophisticated and skeptical than their counterparts who manned the homefront during World War II and . saw to that. Aided by a skeptical and at times, openly hostile press, we look upon military pronouncements about the war with a cynicism born of experience and leavened by pundits and talking heads who tear into the information coming from the military using as a baseline the idea that nothing that comes from the Pentagon can be believed.

On the same day a top Taliban commander appeared on Al Jazeera claiming Osama bin Laden is alive and well and planning operations in and , two top generals from the and downplayed his significance, saying it is more important to destroy the al Qaeda network than to go after bin Laden.

In a burst of activity over the last eight days, FBI agents and federal prosecutors have won a guilty plea from a former congressional aide, implicated two more House of Representatives members and put the scandal surrounding onetime super-lobbyist Jack Abramoff's influence-peddling back into the headlines.

The pace of the inquiry, which now has bagged a veteran congressman, a deputy Cabinet secretary, a White House aide and eight others, appears to be accelerating.

The American legal system has rediscovered the virtue of one of the most ancient forms of punishment—public humiliation. Prostitutes' “Johns” can now have their names aired on television. Mail thieves can find themselves wearing a sandwichboard giving full details of their crime. And people who deface Nativity scenes can end up parading through town accompanied by a donkey.

And neoconservatives? These too, it seems, are now being subjected to a grand exercise in public humiliation.

Is it possible to find enough nasty things to say about Rush Limbaugh? I don't have the vocabulary or the time fully to describe a man of such privilege that he can go relatively unpunished for drug charges that would have sent another man to prison; whose friends in high places (no pun intended) make sure that he can lie and vituperate and rave against the politics of our founding fathers and the philosophy behind our nation without let or restraint or consequence. But let me try.

Why does anybody still care what Tom DeLay thinks? Of course he will say outrageous crap. He’s a disgraced, toxic bombast with less personal credibility than most inanimate objects. He ran the Congress into the ground and personally contributed as much as anybody to losing the GOP majority. The only way he will see his name in a headline that doesn’t include the word ‘trial’ is if he says something outrageous. He’s a troll, I say ignore him.

When people in say "no man is an island," as Joan Didion once put it, they think they are quoting Ernest Hemingway. But when Hemingway annexed the seductive words from John Donne's Devotions, quoting the whole paragraph on his title page and borrowing from it one of the 20th century's most resonant titles, he did not literally mean to say that all funerals are the same or that all deaths are to be regretted equally. He meant that if the Spanish republic went under to fascism, we should all be the losers. It was a matter both of solidarity and of self-interest: Stand by your friends now, or be shamed (and deserted in your turn) later on.

The grisly events at Virginia Tech involved no struggle, no sacrifice, no great principle. They were random and pointless. Those who died were not soldiers in any cause. They were not murdered by our enemies. They were not martyrs.

If you remained unmoved by scientists' excitement at the discovery of a "second Earth" 20 light years away from us then consider this: bookies have now slashed the odds of little green men appearing from 1,000/1 to 100/1.

Photograph by Thaier Al-Sudani/Reuters
Posted by Shaun Mullen at 5:33 AM
Email ThisBlogThis!Share to TwitterShare to FacebookShare to Pinterest