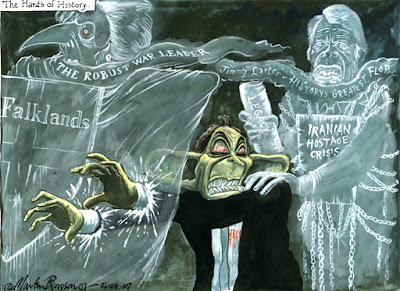 The Hands of History: Ghosts That Haunt Tony Blair

The recent mock siege of the British embassy in Teheran by "demonstrators" hurling stones and firecrackers, pretending to be outraged at Whitehall's arrogant refusal to "apologize", was described by the Times of London as "hampering diplomatic" efforts to solve the crisis. That remark by the Times underscores how badly they misunderstand the game Teheran is playing. Teheran's game plan has worked as brilliantly as Whitehall's has been abyssmal and here's why. The principal uncertainty facing the Ayatollahs on the day they kidnapped the British sailors was how London would react. Would Whitehall respond through diplomatic channels or was this going to be treated as a crisis that would jump the green baize routine? On the day the incident took place, the Ayatollahs could not be sure.

Remember how John McCain that there are neighborhoods in Baghdad where Americans can go for a stroll? Well, he decided to put his money where his mouth is: He "strolled briefly through an open-air market in Baghdad," after which he claimed that Americans are not "getting the full picture" of Iraq / the surge. A journalist then, asked McCain about his statement that there are [safe] neighborhoods, etc. McCain answered: "Yes, I just came from one."

The only problem: He was accompanied by 100 American troops, 3 Blackhawk helicopters, two Apache gunships overhead, and he was wearing a bullet proof vest.

A day after members of an American Congressional delegation led by Senator John McCain pointed to their brief visit to Baghdad’s central market as evidence that the new security plan for the city was working, the merchants there were incredulous about the Americans’ conclusions.

“What are they talking about?” Ali Jassim Faiyad, the owner of an electrical appliances shop in the market, said. “The security procedures were abnormal!”

[Michelle] Malkin has decided to found some kind of club that basically involves...well, being vigilant, or something. It involves emulating James Woods. And not letting shari'a law be imposed at your local swimming pool. Or at restaurants (?). And wearing buttons. 'Cause nothing scares a terrorist away from attacking innocents like seeing some pencil-necked limp-dick sporting a button that proclaims "I Am John Doe."

Until now, only the Democrats seemed to have mastered the art of the retroactive apology. “I was wrong,” said John Edwards and John Kerry and Chris Dodd, while apologizing for their votes to authorize the war. It strained credulity to think that any Republican, and certainly not a “loyal Bushie,” would ever confess misjudgment, or to even hint that the current president was anything short of peerless.

Yet now we have Matthew Dowd, a former key member of the Bush inner circle, declaring publicly that (a) the Decider has feet of clay, (b) the war in is a disaster and we should pull out, and (c) the best 2008 candidate might arguably be Barack Obama. A Bush guy was saying this stuff? I thought I was reading a put-on from The Onion.

There was a time when being a Republican or even voting for a Republican meant or implied, at least, some sort of commitment to individual liberty vis-a-vis the government. That time is over. Those of us who care about liberty, whether we choose to fight for it inside the GOP or as Democrats or outside as non-partisan freedom-lovers, need to understand that this idea of conservatism as an ally of freedom is currently in eclipse in the GOP.

It is really getting well past the point of annoying and sloppy to keep hearing over and over the absolute lies and nonsense from the talking meatsticks, the ethically challenged administration and Republicans in Congress when they try and tell us how their opinions are what "the majority of Americans" want when this couldn't be further from the truth.

With Congress out on spring break it is now silly season. The press will revert to meta issues with a vengeance. This morning it seems to be all about the quarterly earnings of the various Democratic candidates. Well, that and the fact that Tom Tancredo is going to run for president. And I think that Tancredo will add a valuable voice to the Republican primaries . . . for the Democrats.

My official death toll of 1,723, representing deaths due to immediate and direct effects of the storm, has not changed since . However, we now have a fascinating document that comes from testimony delivered to Congress, which has caused me to raise the total deaths from Katrina due to direct and immediate plus delayed effects to 4,081.

Cartoon by Martin Rawson for The Guardian