On What a Lovely War! 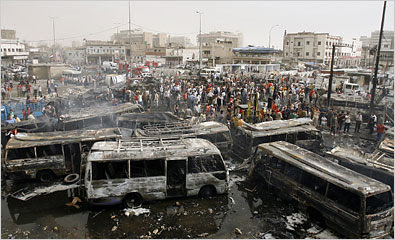 NOW BOARDING FOR PLAN G
There have been six American strategies in the four-plus years of the Mess in Mesopotamia.

We are now in the midst of what Iraq war veteran Phillip Carter calls Plan F, the sixth and penultimate strategy, which is known as the Surge. But as sure as Muslims face Mecca when they pray, there will be a seventh and final strategy -- Plan G as in Get The Hell Out. And because the surge is failing, there is the nagging question of when that retreat might ensue and what Iraq's fate will be when it does.

En route to Iraq last Friday, Robert Gates told reporters that "The clock is ticking," that it's time for the Baghdad government to get its act together and that President Bush's patience is finite.

Perhaps the defense secretary was getting a little overbaked from the sun as he stood on the tarmac, because the last thing Bush wants is for the clock to begin ticking -- the very prescription for getting the hell out in the Democrat-crafted spending bills now before Congress that he vows to veto -- because that would mean that his Forever War won't be forever.

Under the Bush administration's perverse calculus, there is no alternative to a Forever War because the notion that the Americans can only stand down when the Iraqs stand up remains paramount, if threadbare. This is the small beer version of what once was unabashedly defined by the White House as "victory."

The alternative, the selfsame White House tells us, would be to pack up the old unarmored Humvee and head home, leaving Iraq in the hands of sectarian wackjobs, terrorists, gangsters, black marketeers and preverts of every stripe.

Most notable of these reprobates is Al Qaeda, the deadliest of the Sunni insurgent groups, which has been making Swiss cheese of Plan F with 11 suicide bomb attacks last week inside the vaunted Baghdad surge perimeter. A close second is Moqtada Al-Sadr, the virulently anti-American Shiite cleric.

This Sunni-on-Shiite carnage has gone on as U.S. troops supervise a hitherto unpublicized aspect of Plan F -- the feverish construction of a three-mile long admission of failure in the form of a Berlin Wall-esque barricade right through the heart of the capital in a desperate effort to try to keep the Sunni Hatfields and Shiite McCoys apart. Wait! There's more. It turns out that the Stand Up-Stand Down plan has undergone an undisclosed downsizing. Training the Iraqi Army to stand up is no longer a priority, meaning that it will still be unable to do much more than wipe its ass with or without the Americans.

Yet staying the course becomes more unappealing every day, and it's not because of a toilet paper shortage.

With every uptick in the American casualty rate and downtick in the president's approval ratings, the U.S.'s true Achilles heel in Iraq becomes more obvious. No, not Al Qaeda, but that cocked hat of a prime minister -- Nouri Al Maliki.

"Even if Gen. Petraeus' plan succeeds on the streets of the city, it will fail in the gilded palaces of the Green Zone. Maliki and his supporters desire no rapprochement with the Sunnis and no meaningful power-sharing arrangement with the Sunnis and the Kurds. Indeed, Maliki can barely hold his own governing coalition together, as evidenced by the Sadr bloc's resignation from the government . . . and the fighting in over oil and power."

If the U.S. withdraws that means there will be an Al Qaeda takeover, right?

Wrong, says Marc Lynch, who undercuts the most widely accepted argument for why the U.S. can't quit Iraq with a healthy dose of skepticism and an intimate knowledge of the insurgency.

Lynch, a Middle East expert and blogger at Abu Aardvark, says that there is a growing power struggle between Al Qaeda and the larger Sunni insurgency because of insurgency leaders' disinchantment with Al Qaeda's unilateralist goals, which include growing the nascent Islamic State of Iraq, as well as its brutal methods. Lynch says that this situation actually helps the case for an American withdrawal.

It's tough to take sides in this particular smackdown because it's between really bad people and merely bad people. Lynch notes the irony of one of the things that has the larger insurgency so upset -- Al Qaeda's George Bush-like declarations that those who are not with the Islamic State are against it.

So what does this mean for the U.S.?

"The most important implication of the Sunni turn against Al Qaeda is not that the 'surge' is working, or that the insurgency is losing steam. Rather, the insurgency's turn against Al Qaeda -- if it comes to fruition -- actually strengthens the case for an American withdrawal, by putting to rest fears of becoming a new base for global jihad. The escalating confrontation we've witnessed between the insurgents and Al Qaeda suggests that they would not afterwards tolerate the kind of Al Qaeda presence that Americans fear. Meanwhile, the currently dominant trends in the insurgency have made it ever more clear that they are willing to talk to the Maliki government and the , if only they get a strong commitment to withdrawal."

In other words, those spending bills that President Bush threatens to veto could do more to hasten an Iraqi reconciliation than his stumbling Plan F.

Then there's Moqtada Al-Sadr, who despite his "Death to America" bellicosity, doesn't want U.S. troops to withdraw just yet because Iraqi security forces aren't ready to face down his Sunni foes.

"[Al-Sadr] has become a great improviser, the Miles Davis of the war.

"He publicly courts anti-American Sunni nationalists while his Mahdi Army militia kills Sunni Arabs. He denounces Shiite groups backed by Iran while he is said to be hiding in Iran and taking instructions from clerics there. He promotes Shiite unity while Mahdi fighters battle other Shiite groups in cities across the south . . . "

In other words, those spending bills that President Bush threatens to veto could do more to hasten an Iraqi reconciliation than his stumbling Plan F.

Plan A called for the rapid withdrawal of U.S. combat forces and quick transition to stability and reconstruction following the initial -- and failed -- "shock and awe" phase of the war.

Plan B called for the transition of security to a smaller headquarters operation and reconstruction to the Coalition Provisional Authority, but was brought down by the growing insurgency.

Plan C called for a resumption of major combat operations that did little more than fill prisons and inflame anti-American sentiment, indirectly leading to the Abu Ghraib scandal.

Plan D called for the transfer of security operations to Iraqi forces, the ratification of an Iraqi constitution and national elections, but was rudely interrupted by the bombing of the Golden Mosque in Samarra, which ushered in the civil war.

Plan E was the first security push in Baghdad, which foundered because there were not early enough troops.

Photograph by Ahmad al-Rubaye/AFP-Getty Images
Posted by Shaun Mullen at 5:32 AM
Email ThisBlogThis!Share to TwitterShare to FacebookShare to Pinterest