Dick Cheney Before He Dicks You 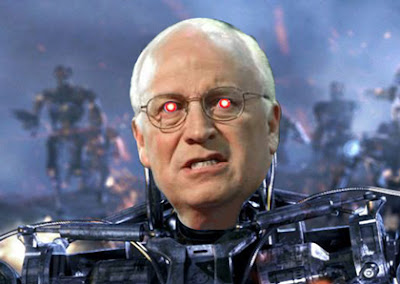 Just when you thought the nutbags occupying the right wing of the Republican Party couldn't get any loonier comes an editorial in the New York Sun that states with dead seriousness that Vice President Cheney should run for president because it would be good for what ails the GOP.

"A Cheney candidacy would serve to defend Bush on the campaign trail and force a greater fealty to and respect for George Bush's record from the other candidates. Which is quite a window into the current conservative mindset: Bush isn't unpopular because his policies have been historic failures, he's unpopular because he lacks sufficiently vigorous defenders. . . . Place a constant reminder of George W. Bush on the campaign trail [and] wreck the Republican Party for a generation. Make that reminder Dick Cheney, and we may as well resuscitate the Whigs."

Meanwhile, the veep was doing Oxycontin shooters with Rush Limbaugh on his radio show the other day and made a case for why Iraq has become George Bush's Forever War:

"[The Democrats] seem to think that we can withdraw from Iraq and walk away from it. They ignore the lessons of the past. Remember what happened in Afghanistan. We'd been involved in Afghanistan in the eighties, supporting the Mujahideen against the Soviets and prevailed. We won. Everybody walked away, and in the nineties, Afghanistan became a safe haven for terrorists, an area for training camps where Al-Qaeda trained 20,000 terrorists in the late nineties, and the base from which they launched attacks on the United States on 9/11. So those are very real problems, and to advocate withdrawal from Iraq at this point, it seems to me, simply would play right into the hands of Al-Qaeda."

No withdrawal. No end in sight ever. And no regrets.


Image courtesy of Blognonymous
Posted by Shaun Mullen at 5:45 AM
Email ThisBlogThis!Share to TwitterShare to FacebookShare to Pinterest

Thank you, Charles, but I am unable to take credit for the turn of phrase.

It is from a Watergate-era bumper sticker which read:

Dick Nixon Before He Dicks You

Shaun, thanks for the mention on the photo, but in the spirit of always whoring my own blog, could I trouble you to link the note at the end (or the photo) back to the post it came from?