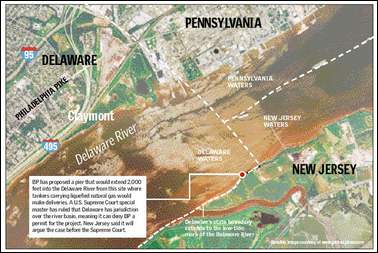 White line shows Delaware border, which extends to New Jersey
shoreline and site of proposed LNG terminal (red dot)
In a major victory for environmentalists and my fellow Delaware residents, a special master appointed by the U.S. Supreme Court has ruled that the tiny state's jurisdiction over the Delaware River basin extends to the New Jersey shore, meaning likely defeat for a proposed multi-billion dollar liquefied natural gas terminal.


Special Master Ralph I. Lancaster, drawing on over 300 years of history dating back to pre-Colonial settler William Penn, said that "as the sovereign owner" of the Delaware River bottom, the state of Delaware can regulate and police developments extending from New Jersey's shoreline.

New Jersey officials said they would appeal to the high court, which has final say, although the court usually relies on the decisions of its special masters and has ruled for Delaware in two previous cases involving the disputed border.

The case was brought after Delaware rejected a permit for a 2,000-foot-long pier extending out into the Delaware from the Jersey shore where tankers carrying super-chilled gas would make deliveries to a terminal proposed by energy giant BP.

The proposal raised safety fears because an estimated 22,000 residents living near the river's main shipping channel would have been at risk of death in the event of a major accident. The terminal also was a violation of Delaware's pioneering Coastal Zone Act, which bans new heavy industry along the river.

"This is great news for Delaware. This is also a good time for Delaware and New Jersey to reaffirm our common goals for protection of one of Delaware's most precious environmental resources -- the Delaware River."


For its part, BP claimed that its reading of the opinion would give Delaware authority over the pier only after construction. (Duh.)

The Federal Energy Regulatory Commission, which regulates LNG terminals, granted conditional approval for BP's project in 2006, but that permit was subject to approval by Delaware.

The terminal would receive two to three big tankers of super-chilled LNG each week, each carrying enough gas to meet a day's needs for 15 million or more homes. Supporters said the project would provide stable supplies and prices for mid-Atlantic natural gas users, while giving a boost to South Jersey's economy.

The border dispute stems from a pre-Colonial deed issued to William Penn that put all of the river inside Delaware up to the low-water mark on the New Jersey side from the Pennsylvania line to the northern tip of Artificial Island. Further to the south in both the river and Delaware Bay, the boundary shifts to the middle of the water.

"New Jersey does not dispute Delaware's ownership of the land up to the low-water mark," wrote Lancaster, a Maine attorney who has handled other interstate cases for the high court.

New Jersey argued, however, it could grant title to the area from its shores to the middle of the shipping channel. Lancaster ruled that theory would effectively override "with no compensation -- this court's careful determination of the boundary."

Delaware's Coastal Zone Act is a think of beauty. It has repeatedly resisted legal challenges from major corporations seeking to build refineries and other heavy industrial facilities along and into the river.

The act was pushed through the Delaware General Assembly in 1971 during the first stirrings of the American environmental movement by Governor Russell W. Peterson, a moderate Republican who later headed the National Audubon Society.

Aside from an oil refinery and several smaller industrial facilities built prior to the act, there is no other industry on the river and bay. The result has been a substantially pristine coastline with wildlife sanctuaries and state-owned beaches open to the public outside of the few small incorporated communities.

Posted by Shaun Mullen at 8:05 AM
Email ThisBlogThis!Share to TwitterShare to FacebookShare to Pinterest