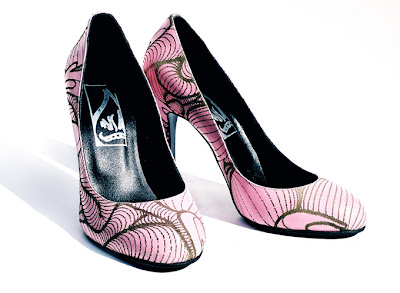 Expend more than a minute thinking about high heels and you realise what a bizarre, useless, damaging and dangerous part of women's fashion they are; yet bring it up with females and they tend to go two ways.

"I hate them and won't wear them (except on special occasions!)" and "You get used to them and, anyway, they make me feel more feminine"; which is kind of like me saying driving fast without a seat belt makes me feel more like a man.

We seem to have discovered a new stage in the traditional Kübler-Ross process:

2. Anger: "The treasonous far-left liberals and their media lapdogs are making us lose in ."

3. Bargaining: "If we send x-thousand more troops to , victory will be ours."

4. Depression: "Did you catch 300 yet? [munch-munch-burp] God, it made me hate liberals even more. [channels flipping] They wouldn’t last a day in ancient ."

5. Advanced Literary Theory: "The hegemonic binary of 'success' and 'failure' traumatizes the (re)interpretive possibilities of an ethos of jouissance regarding the War in ."

There are two Iraq wars being waged, according to military officers on the ground and defense experts: the one fought in the streets of Baghdad, and the war as it is perceived in Washington. . . .

While Washington appears headed toward a political endgame on Iraq, with the White House and Congress sparring over benchmarks and pullout dates, the war on the ground is at an ebb tide. All sides -- including U.S. military strategists and Iraqi sectarian leaders and insurgents, as well as regional players such as Iran, Syria, Saudi Arabia and Turkey -- are waiting to see whether the new U.S. approach to make the Iraqi capital safer will work. Soldiers on the ground tend to see the Washington debate as irrelevant, and the perspective of many politicians in Washington is that the military schedule is simply too slow.

"The time scale to succeed is years," said John J. Hamre, a former deputy defense secretary, while "the time scale for tolerance here is 12 months for Democrats and 18 months for Republicans."

Why exactly was the resolution of the latest Iran hostage crisis a "success" for Iran and a "humiliation" for Britain, as the hawkish Charles Krauthammer argues . . . ? The hostages were released in a one-day propaganda stunt, maybe in exchange for the release of an Iranian we were holding and Iranian visitation rights for some others. But the Iranians were also looking at an awful lot of aircraft carriers steaming around their neighborhood. Didn't they blink? If that's humiliation, it's not far from what a U.S.-U.K. victory in the crisis would look like.

There is at least one point on which we and the critics of Nancy Pelosi’s visit to Damascus can agree: It is the White House, not the speaker of the House, that should be taking the diplomatic lead. But the Bush administration has far more appetite for scoring political points than figuring out whether talking to Syria might help contain the bloodletting in Iraq or revive efforts to negotiate peace.

So long as Mr. Bush continues to shun high-level discussions with this troublesome but strategically located neighbor of Israel, Lebanon and Iraq, such Congressional visits can serve the useful purpose of spurring a much needed examination of the administration’s failed policies.

The U.S. attorney firings scandal has laid bare the administration's -- and particularly Karl Rove's -- preoccupation with prosecuting voter fraud. But there's a flip side to this coin. The Justice Department's Civil Rights Division has virtually abandoned its traditional role, undertaken since the 1965 Voting Rights Act, of actively protecting African American voters from discrimination.


When former New York mayor Rudolph W. Giuliani urged President Bush to make Bernard B. Kerik the next secretary of homeland security, White House aides knew Kerik as the take-charge top cop from Sept. 11, 2001. But it did not take them long to compile an extensive dossier of damaging information about the would-be Cabinet officer.

They learned about questionable financial deals, an ethics violation, allegations of mismanagement and a top deputy prosecuted for corruption. Most disturbing, according to people close to the process, was Kerik's friendship with a businessman who was linked to organized crime. . . .

Alarmed about the raft of allegations, several White House aides tried to raise red flags. But the normal investigation process was short-circuited, the sources said. Bush's top lawyer, Alberto R. Gonzales, took charge of the vetting, repeatedly grilling Kerik about the issues that had been raised. In the end, despite the concerns, the White House moved forward with his nomination -- only to have it collapse a week later.