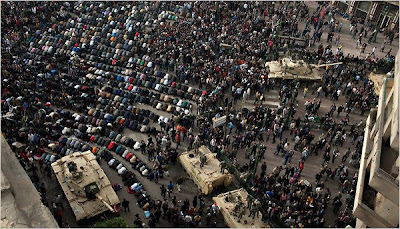 The ongoing protests in Egypt, which follow protests in other repressive Mid East countries, are yet another reminder of how difficult it is for most politicians and pundits to divorce themselves from the notion that the planet revolves around Washington.

The Al Jazeera-fueled protests have unleashed the inevitable spate of charges that President Obama has "abandoned" the Arab world, typically from the very neocons who dragooned the Bush administration into the Iraq war, the single most destabilizing regional event in decades.

While I wish well each and every Arab brother and sister who thirsts for democracy while choking back teargas, there is nothing that Obama in particular and the U.S. government in general will do -- let alone can do -- to hasten this change. Washington will not overtly support the protesters by asking Egyptian President Mubarak to step aside.

Egypt is a particularly tough nut because the likelihood of Mubarak going voluntarily, as did his counterpart in Tunisia, is slim, although he is making symbolic concessions like ordering the resignation of his cabinet and appointing a vice president (who in reality is little different than he is), which will be more of a sop to his Western allies than the protesters. And if Mubarak survives, it will be through brutal repression.

Meanwhile, the opposition has coalesced around Nobel laureate Mohamed ElBaradei but remains grassroots and young in the extreme, which is to say not nearly well organized and seasoned as it was in Iran. A conspicuous exception is the transnational and ultra-conservative Muslim Brotherhood, which is outlawed in Egypt and is staying in the shadows for the time being, although it has endorsed ElBaradei as a negotiator for the protesters.

Then there is the fact that the U.S. and its foreign aid largess has, to a great extent, kept Mubarak in power. He makes nice with Israel, the U.S.'s all-important regional ally, while Egypt has been a reliable bulwark against terrorism. And although the Muslim Brotherhood has renounced more violent expressions of Islam, the group arguably would be the U.S.'s worst nightmare if Mubarak were to go and it came to power.

Then there is the biggest question of all in this hall of mirrors: Is the U.S. support of democracy in the Mideast at its heart a sham? And if democracy were to be possible in, say Egypt, which I have grave doubts about, would it encourage radical Islam, replacing one kind of tyranny with another?

I don't think we'll find out anytime soon. But when and if we do, the payback could be a bitch and a half.

Photo by Scott Nelson for The New York Times

Mubarack is going to have two choices, stand and fight, literally, or hop in his helicopter, with his suitcases of gold and cash, and make a run to Venezuela, where Hugo will greet him with open arms and help him with his luggage...
The Muslim brotherhood is on a roll, at the moment, they have momentum...But that could suddenly change if Mubarack got really tough and decided to pacify the population by force...The only question then is if the military will obey him...He better keep that copter warmed up, things could change rapidly...