The Corporatocracy's Quiet Coup: Obama Catches A Wave, But It Hardly Matters 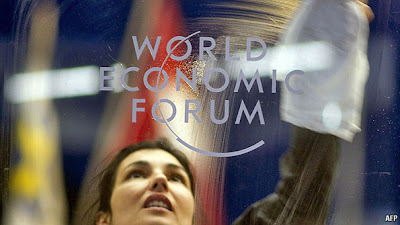 As forgettable State of the Union speeches go, Barack Obama's turn last night was perhaps slightly less so. The president has caught a wave, how big or sustained we don't know, as his approval ratings tick up, the comity he engendered in his Tuscon rampage memorial speech percolates through the body politic, the economy shows signs of life, and the Republican opposition finds itself being co-opted, a la Bill Clinton, on some of their own talking points.

But as my blogging friend Ron Beasley perceptively notes, what gets said at the World Economic Forum in Davos this week ultimately will be far more important than what got said on Capitol Hill last night:

"We have had a silent coup in the United States that has made our elected officials irrelevant -- they don't set policy or create laws, that has become the responsibility of the heads of a few multinational corporations and bankers.

"Yes, there may appear to be some differences between the two major parties but these differences have little to do with the big picture. This is allowed and encouraged to create the illusion that we still have a democracy. The health care bill which was written by the health care industry is an example. While it was far to the right of a plan put forward by Richard Nixon and blocked by Teddy Kennedy it was labeled as socialist. Propaganda of tribal warfare. While the plutocrats who could really care less about abortion or gay rights conflict on social issues was encouraged because it strengthened tribalism without really impacting the economic goals of the plutocrats. While the balanced budget argument is encouraged the plutocrat's interests would be harmed -- closing the lid of their Federal cookie jar. It can be part of the tribal warfare because it won't happen.

"We should not pay any attention to what Obama says in the SOTU -- we should learn as much as we can about what goes on at Davos. It was a quiet coup but a coup none the less. Your elected representatives are employees but not your employees. They work for the folks at Davos."

A keystone of Obama's speech was jobs creation, but that simply isn't going to happen in sufficient and sustainable numbers.

Because corporations, which are swimming in record profits in the wake of record layoffs, have no incentive to create jobs. And try as they might, the president and Congress can't wave a wand and make it so.

We are approaching the one-year anniversary of the worst Supreme Court ruling since the Dred Scott decision in 1857. I speak, of course, of Citizens United v. Federal Election Commission in which the court's nihilist justices gave carte blanche to corporations to buy politicians out in the open, as opposed to the various forms of big business bribery that already grease the skids of many a campaign and legislative initiative.

Being a thoughtful sort (most of the time anyway), I eventually channeled my deep anger over the decision away from what it meant for American democracy (that's pretty obvious since the justices ludicrously equate buckets of money with free speech) to whether I had missed some larger point.

I indeed had and this is it: I and my liberal kin doth protest too much because Citizens United was an inevitable outgrowth not just of a high court that has lurched to the right but a society in which corporations and government, as Ron notes, move ever closer to a big fat corporatocracy.

We have no one but ourselves to blame for this devolvement from what the Founding Fathers intended to what the motherforkers in Washington and their board room puppet masters have wrought. This is because, truth be known, Wall Street and Washington have been hammering away at the intrinsic virtues of democracy for decades and that has been okey dokey with Main Street, which every two years dutifully elects -- and more often re-elects -- legislators whose hands are in every pocket but their own.

The Founding Fathers made it clear that people had rights but that when it came to corporations rights could only be conferred. Those five conservative Supreme Court justices, of course, see things radically differently and in the kind of pretzel logical that made Dred Scott such an abominable ruling declared that corporations should be unfettered because of their contributions to the dissemination of the ideas that the First Amendment seeks to foster. Given this kind of "thinking," the obeisance to corporate power by five men who have masqueraded as advocates of judicial restraint came as no surprise.

The Founding Fathers put an awful lot of stock in the Wisdom of the People and we have miserably failed both them and ourselves.