The Enduring Mystery Of The Disappearance Of The Anasazi Pueblo 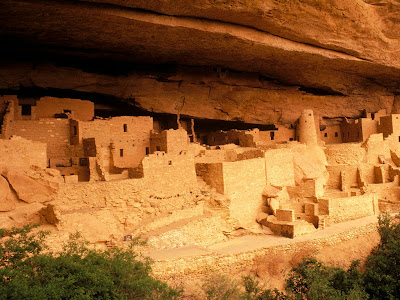 Mesa Verde Cliff Palace (top) and The Castle at Hovenweep

(PORTIONS ORIGINALLY PUBLISHED IN OCTOBER 2008)
Except for the distant cry of a raven, there were only the soft sounds of my children, a friend and I peeling and munching on orange slices. It was noontime and we were squatting under the cottonwoods in a ravine beneath The Castle, an exquisitely constructed silo-like structure of sandstone at 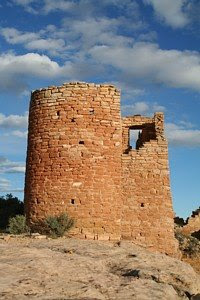 Hovenweep, a cluster of Anasazi ruins in the Utah desert. The trees offered the only shade for many miles around.

Hovenweep was the northernmost advance of the Anasazi, or Ancient Puebloans to use the politically correct term.

Why these people, whose origins have been traced to Mexico in about 1,200 BC, migrated north onto the Colorado Plateau -- present day Arizona, Colorado and Utah -- is barely understood. But it is their sudden disappearance about 700 years ago, leaving Hovenweep (which means "deserted valley" in the Piute-Ute languages) and other contiguous "cities" abandoned and much as they looked when we passed the heat of the day in that ravine, that remains the

most enduring mystery of the Southwestern U.S.

* * * * *
I was reminded of my trips to Hovenweep and treks to other ruins over the years by a New York Times story. 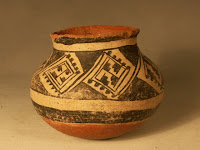 exhaustively studied. But the mystery of the Anasazi's disappearance seems no closer to being solved than when cowboys Richard Wetherill and Charles Mason became the first white men to spot the ruins of the magnificent Cliff Palace at Mesa Verde in 1888 when they became lost while looking for their cattle.

There is speculation aplenty about what happened to the Anasazi.The old favorites are a killer drought or mini ice age, but these have pretty much fallen out of favor as the complexity of Anasazi society has become better It is obvious

that these people almost certainly would have adapted to severe climate changes as they had in the past.
More contemporary explanations involve warfare and most controversially, cannibalism.

* * * * *
On another trip, I spend a day with an archaeologist walking the country around Sand Canyon Pueblo near Mesa Verde. As in slowly walking because the temperature broke 100 degrees by 9 a.m. and kept climbing.The archaeologist patiently explained to me how to adjust my eyes to see not just the jumble of rocks and other

rubble, but to spot pottery shards and traces of the small kivas that once dotted the area. It took a while, but I soon was overwhelmed by all the traces of the long-disappeared Anasazi arrayed before me, including the remains of two pretty good sized kivas.

An explore of a shallow cave on the way back to my friend's ranch later in the day yielded two startling discoveries: An ancient pictograph etched into the far wall and an empty pizza box of more recent vintage.As the Times story notes, archaeologists now believe that the residents of Sand Canyon originally farmed maize and raised domesticated turkeys, but as drought overtook the region they turned to hunting and gathering and then

warfare.
Some archaeologists now say that it is apparent that these villagers were killed, dismembered and possibly eaten, although the latter is so insulting to Native Americans that I was scolded when I mentioned the possibility of cannibalism in a conversation with some Utes.

These peoples have yet to tell all of their many-faceted stories about the Ancient Ones, while it has only been in the relatively recent past that

scientists have begun to look beyond the physical dimension of archaeological digs and see these people as deep thinkers and not merely ape-like primitives.

So my own solution to the mystery has gained some favor: The Anasazi were a profoundly spiritual people. They received a message that it was time to move on. And did.

Ever spend any time on the San Juan? Lotsa ruins, some whitewater, and a whole lot of country.

I've wanted to visit Mesa Verde since I was about 12 years old; perhaps later this year I will finally do it.

I happened onto your blog. It was a breath of fresh air. Thank you for making the blog look worthwhile.

Thank you for the comments. Incidentally, the best book on the discovery of Mesa Verde is "Richard Wetherill: Anasazi: Pioneer Explorer of Southwestern Ruins" by Frank McNitt (University of New Mexico Press, 1957, 1966)