Review: 'The Warm Of Other Suns: The Epic Story of America's Great Migration' 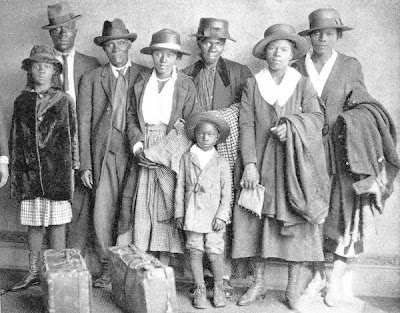 I was taking a part of the South to transplant in alien soil / To see if it would grow differently / If I could drink of new and cool rains / Bend in strange winds / Respond to the warmth of other suns / And, perhaps, to bloom.
~ RICHARD WRIGHT
As migrations go, it dwarfed the California Gold Rush of the 1850s of some one hundred thousand people and the Dust Bowl migration of some three hundred thousand people in the 1930s. Somewhat perversely, the Great Migration of six million blacks from the South through the middle decades of the 20th Century was so immense that it has escaped the notice of most historians.

That imbalance has finally been corrected with the publication of Isabelle Wilkerson's The Warm of Other Suns: The Epic Story of America's Great Migration, a magisterial examination of a mass act of independence by a people who had been in bondage far longer than they had been free.

* * * * *
Wilkerson, whose mother was a migrant, conducted more than a thousand interviews but focuses on three blacks who could not be more different given their backgrounds, departing points and destinations, although all were determined to join the Great Migration against formidable odds.

Ida Mae Brandon Gladney was a sharecropper’s wife from the Mississippi bottom lands. She married at 16 and toiled in abject poverty. The catalyst for her husband's decision to take his family North was the near-fatal beating of a relative by a white posse, and in 1937 the Gladneys moved to Chicago.

George Swanson Starling was valedictorian of his colored high school in central Florida. Forced to drop out of college when his father would no longer support him, he went to work picking citrus. Appalled by conditions, he tried to organize a strike but fled to New York in 1945 after he learned that growers, backed by the sheriff, planned to lynch him.

Robert Joseph Pershing Foster was the most privileged of the three. Educated at Morehouse, the most prestigious black college in America, and trained as a surgeon, he understood that he had no future in his native Monroe, Louisiana, or for that matter almost anywhere else in the South and in 1951 migrated to Los Angeles.

I did have a couple of quibbles with The Warmth of Other Suns.

First, the experiences of blacks in the Jim Crow South were so similar that reading them over and over . . . and over again became a bit numbing. Secondly, the experiences that migrants underwent in the North were frequently daunting in and of themselves, something that Wilkerson glosses over.

Wilkerson concludes The Warmth of Other Suns by asking if the Great Migration achieved the aims of those who willed it.

Social scientists concluded that they did not and in fact visited ills upon the urban North by migrants whom they characterized as illiterates who imported out-of-wedlock births, joblessness and a dependency on welfare.

Census records suggest the opposite.

"According to a growing body of research," writes Wilkerson, "the migrants were, it turns out, better educated than those they left behind in the South, and, on the whole, had nearly as many years of schooling as those they encountered in the North. Compared to the northern blacks already there, the migrants were more likely to be married and remain married, more likely to raise their children in two-parent households, and more likely to be employed. The migrants, as a group, managed to earn higher incomes than northern-born blacks even though they were relegated to the lowest-paying positions. They were less likely to be on welfare than the blacks they encountered in the North, partly because they had come so far, had experienced such hard times, and were willing to work longer hours or second jobs in positions that few northern blacks, or hardly anyone else for that matter, wanted."

The South in a sense suffered a double loss because of its subjugation of blacks.

It lost the Civil War and with it 93,000 of its fathers, sons and brothers, and then instituted draconian laws against blacks that in some respects were worse than slavery. This is what prompted the Great Migration.

Contemporary apologists for the Confederacy and antebellum South would do well to read The Warmth of Other Suns. And weep.