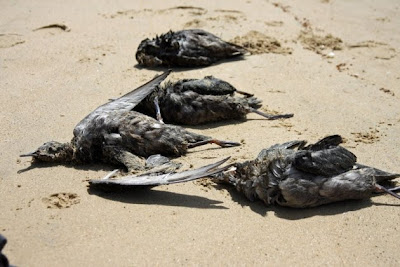 Although it will come as a disappointment to conspiracy theory freaks and end timers, the recent spate of mass bird deaths is not not only not unusual, it is a fact of life. What is unusual is that they have been witnessed by humans.

Starting just before the turn of the New Year, 500 red-wing blackbirds died en masse in Louisiana, some 100 jackdaws turned up dead on a street in Sweden. Meanwhile, an estimated 100,000 fish went belly-up in Beebe, Arkansas the day before 5,000 blackbirds slammed into roofs, mailboxes and the ground at full speed.

From bats to whales to bees to frogs, wildlife health experts say, major mortality events happen with regularity for reasons ranging from bad weather and disease outbreaks to poisonings. The reason this recent spate of events seems so strange is that, most of the time, mass deaths occur in places where nobody notices them.

"This is really not the unusual thing that people are trying to make it into," said Robert Meese, an avian ecologist at the University of California, Davis. "A lot of this stuff happens without anyone documenting it."

Dramatic die-offs are most common in animals that congregate or travel in large groups.

Migratory birds, for example, often become disoriented by fog or storms, causing them to run into towers, bridges, wind turbines and trees. On their long journeys, migratory birds may also accidentally ingest pesticides or even poisons that were left specifically for them. Weather can work against them, too, particularly if they migrate too soon in an unseasonably cold year.

Records kept by the United States Geological Survey list at least 16 die-offs of more than 1,000 blackbirds or starlings over the past 30 years, said Marisa Lubeck, a spokesperson for the USGS. But group deaths among animals have been going on for a lot longer than that.

In a review study published in 2007 in the journal Ibis, researchers looked through European and North American bird journals and other references dating back to the late 19th century. They found frequent reports of deaths of birds in the hundreds, thousands or more.

In one of the most extreme examples, an estimated 1.5 million Lapland Longspurs died during a March 1904 storm in Minnesota and Iowa.

Strandings of whales, seals and turtles get occasional attention. In recent years, caves full of bats have been dying from white nose syndrome. And entire hives of bees have been going down for reasons that are still unclear.

Most of the time, when many animals die at once, they do it far from our daily lives in fields, caves, forests or national wildlife refuges, where animals often live at unusually high concentrations, and diseases can spread rapidly.

In Beebe, Arkansas, on the other hand, thousands of blackbirds had settled for the night in trees near people's homes. After a series of fireworks blasts went off on New Year's Eve, the birds were startled off their roosts. Because blackbirds can't see at night, they ended up flying all over the place, mostly downward.

"I think people should be aware that mortality events in wildlife are normal," said Paul Slota, another USGS spokesperson. "They are a fact of life."