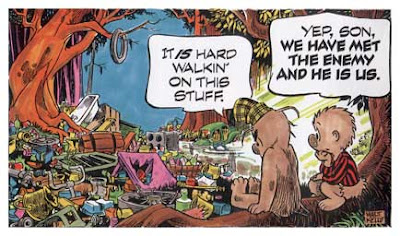 (ORIGINALLY PUBLISHED IN JUY 2009)
In a recent email exchange with Dave Schuler of The Glittering Eye, he summed up beautifully why the illustrator of the late great Pogo comic strip was such an endearing yet powerful cartoonist.

"We could use Walt Kelly about now," Dave said. "Criticism without cruelty."

Pogo, for you younguns, was a possum-like character created by Kelly in 1941 that was the eponymous name of a comic strip that ran in many newspapers from 1948 until two years after his death in 1975, as well as in a steady stream of paperbacks, several of which always graced my parents' living room coffee table.

Pogo was set in the Okefenokee Swamp of Georgia. It included the all-wise Pogo and a cast of bumbling characters -- some 300 in all over the years -- through whom Kelly good naturedly poked fun at venality and greed, as well as the politicians of the day.

In the early 1950, those politicians included the Red-baiting Senator Joseph McCarthy, whom Kelly pilloried as a wildcat (below, right) named Simple J. Malarkey. It was a gutsy move because the powerful 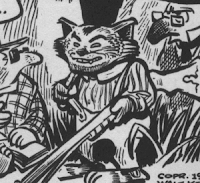 senator could scare off subscribing newspapers. Indeed, Pogo was considered so controversial that some papers moved it to their editorial pages.

When the Providence Bulletin threatened to drop Pogo in 1954 if Malarkey's face appeared again, Kelly had Malarkey throw a bag over his head that appropriately resembled a Klansman's hood as Miss "Sis" Boombah, a Rhode Island Red hen, approached him.

"No one from Providence should see me!" Malarkey huffed.

A generation later, Kelly spoofed Spiro Agnew and George Wallace, among others, and was an early supporter of Earth Day and the environmental movement.

Probably the most famous Pogo quotation is "we have met the enemy and he is us," which was in response to Pogo and a pal coming upon a dump in the swamp. Those nine words beautifully sum up Kelly's view of the human condition.

Pogo succeeded brilliantly because, as Dave noted, the strip was trenchant but always gentle. Better still, it could be enjoyed by both children who were pretty much clueless about the ways of the world and the affairs of the day, and sophisticated adults.

Thanks for the trip back. I do miss Pogo, but miss having rational commentators of any kind.

That cartoon is one of the altarpieces of the 20th century. Along with Guernica, but that's Europe, this is America.

One other one I would like to have on my wall, Albert advising "Don't take life so serious son, it ain't nohow permanent"

I've been a big fan of Pogo and Walt Kelly since I was a kid - my dad introduced me and my brothers to his work through those giant compilation books. Every 11/11, I've quoted Kelly, or ran one of his cartoons for the day.

When the Providence Bulletin threatened to drop Pogo in 1954 if Malarkey's face appeared again, Kelly had Malarkey throw a bag over his head that appropriately resembled a Klansman's hood as Miss "Sis" Boombah, a Rhode Island Red hen, approached him.

"No one from Providence should see me!" Malarkey huffed.

What an incredible way to swing it back at the powers that be! We could use about 30 thousand Walt Kelly's in this age, but would they be published?