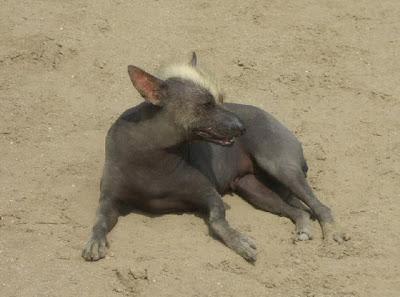 Dogs have been very much on our minds lately with the adoption of Jackson and Nicola, three-year-old brother and sister Chocolate Labradors, so we read with more than passing interest of the discovery of a skull fragment and possibly a foot bone from the world's oldest known domesticated dog from the Americas.

What's left of the dog -- a skull fragment and a possible foot bone -- strongly suggests that the canine was cared for by humans before being butchered, cooked and consumed, according to a post at Animal News.

"This is an important scientific discovery that can tell us not only a lot about the genetic history of dogs but of the interactions between humans and dogs in the past," according to University of Maine researcher Samuel Belknap III. "Not only were they most likely companions as they are today, they served as protection, hunting assistants, and also as a food source."

The discovery was somewhat unintended, because Belknap wasn't trying to dig up old bones from dogs. He was instead conducting thesis research on ancient diet and nutrition of humans during the Holocene Era in the Lower Pecos Region of Texas.

“I didn’t start out looking for the oldest dog in the New World,” Belknap explained. “I started out trying to understand human diet in southwest Texas. It so happens that this person, who lived 9,400 years ago, was eating dog. It just goes to show that sometimes, great scientific discoveries come not when we are looking for specific answers but when we are thorough in our examination of the evidence and open to what data it provides."


Dogs were first domesticated 15,000 or more years ago in Europe and Asia, while New World dogs arrived as a species of Eurasian wolf that crossed the Bering land bridge into North America when people first began to settle the Americas. Sometime after that, the wolves were domesticated and wound up in South America, Texas and other locations.

While we remarked early and often about how smart Jack and Nicky are, evidence suggest that their forebears were much smarter and dogs are now so dependent upon people that they fail basic intelligence tests that wolves and wild dogs pass with flying colors.

The findings provide evidence that humans, through domestication of canines, have caused dogs to lose their non-social problem-solving skills. The loss in skills appears to be "hardwired" genetically into dogs, helping to explain why homeless dogs struggle to survive.