The Mafia: This Thing of All of Ours 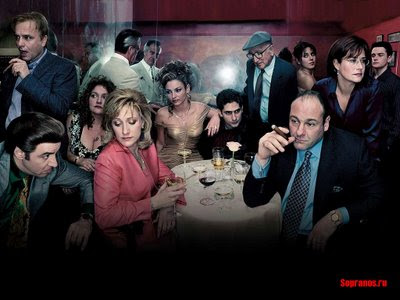 (Portions of this story were originally posted in April 2006)
I've never quite understood the fascination with all things Mafia, but the huge media coverage of the latest FBI-led assault against seven Northeastern crime families shows that this phenomenon, pickled in Hollywood brine, is alive and well in contrast to many of the mob's victims.

I would be disingenuous if I claimed that I have not fallen prey to occassional bouts of fascination with the Mafia, which is more formally known as La Cosa Nostra, or "this thing of ours." Then there is the global fascination with "The Sopranos," which was routinely referred to as the best TV series ever before it ended its eight-year run on HBO in 2007.

My own connection came in the form of a longtime working relationship with Kitty Caparella, a former Philadelphia Daily News reporter who was one of America's premier organized crime journalists. Kitty reported. I edited. That is, when we weren't fighting over her reporting and my editing.

The Daily News was the perfect vehicle for Kitty's stories: Savvy, street smart and with a huge blue collar readership. It covers the mob like the Washington Post cover the White House, only with a flair. When a mobster was gunned down in the parking lot of a South Philadelphia diner, the headline the next day read:


A SIDE ORDER OF LEAD

Anyhow, Kitty covered the mob with the same passion with which the subjects of her stories shake down, extort, smuggle, traffick, assault and murder. They are a mutual admiration society of a sort.

Most of the mobsters really dug Kitty. Some relished seeing their names in print and call her with tips and to correct the occasional error. ("No, Kitty, Joey ain't sleepin' with Rocco's wife. It's the other way around." And so on and so forth.) When they went off to prison, which an awful lot of them have done in recent years, they got Daily News subscriptions by mail and some of them wrote to Kitty regularly. And still do.

Kitty has a fondness for these goons that is kind of like how you'd feel about a bunch of crazy uncles. But only up to a point. She has never lost sight of the fact that while they have a certain charm, they're not very nice. After all, they kill people. The death threats that she occasionally got also serve as reminders of that.
* * * * *
I never miss an opportunity to note the overarching hypocrisy of the Roman Catholic Church, and there are few better examples of its relationship with the mob. In Philadelphia, the church's priests baptize, bless and bury mobsters. They give their children their first communion.

The mobsters, in turn, give lavishly to the church, and in the case of one particular goon used to throw fabulously expensive Christmas parties for his Catholic parish where hundreds of bicycles and other goodies were distributed by a Mafia Santa Claus and elves. The parties ended when he went off to prison.

As regularly as the seasons came and went, the church and Italian America groups would complain to my bosses at the Daily News about its portrayal of these goons. But not once in all of my years in the City of Brotherly Love did I ever hear the archbishop, let alone a priest or officer of the Sons of Italy or Christopher Columbus Society, utter a harsh word about the mob.


* * * * *
I got to know one mobster in particular. Actually, he was a mob "associate," to use law enforcement parlance, and never could become a made mafioso (an initiated and full-fledged mobster) because he was Irish. You know, like Frank Hagen (Robert Duvall) in The Godfather.

Patrick O'Casey (not his real name) shook down local merchants for mob tribute payments, supervised a mob-run nightclub, did troubleshooting (pun intended) for the mob's consigliere (top lieutenant) and babysat the mother of the don (godfather) of the Philadelphia Mafia, a man who bore no resemblance to Vito Corleone (Marlon Brando) physically or intellectually.

Pat had tired of life in the fast lane and threw himself at the mercy of the authorities, who turned him around and sent him back onto the street as a mob informer. Over time, Pat's usefulness to the authorities waned and he found himself in increasing danger, so he was put into the Federal Witness Protection Program. This is a program whereby informers are giving new identities and sent to Omaha, Nebraska, where they toil in hoped for anonymity as clerks at shoe stores.

Okay, I'm exaggerating. Not every informer ends up selling shoes in Omaha, but Pat did. Until the day one of his former mob buddies walked in. You can bet that the guy was not shopping for shoes. Furious, Pat rang up his Witness Protection Program contact and quickly learned that he and his wife had been compromised by the very people who were supposed to protect him. He then turned to Kitty, who handed the story over to me to assign to another reporter because she was too busy chasing other mob intrigues.

I found myself drawn to Pat during the sitdowns that the reporter and I would have with him at South Jersey motels and diners where he would ruminate about life in the mob. Our only disagreement came over his "packing heat." I insisted that Pat come to our meetings unarmed. He eventually agreed.

Pat O'Casey could have been a teacher, a coach or even a philosopher. (He was indeed quite philosophical about his career choice.) At the end of our sitdowns, we'd talk about books and art. I'd have to pinch myself when I walked back out into daylight and remember that while Pat did have a certain charm, Kitty was right. People who kill people are not nice people.

So Kitty's alright, but the RCs ain't. The priests have a mandate to serve not only the saints but the sinners, which is perhaps even more important than Kitty's journalistic mandate to write cute, quotable headlines.

heh, should have seen that coming (the above huffy defense of the catholic 'way'). Great story, Shawn.