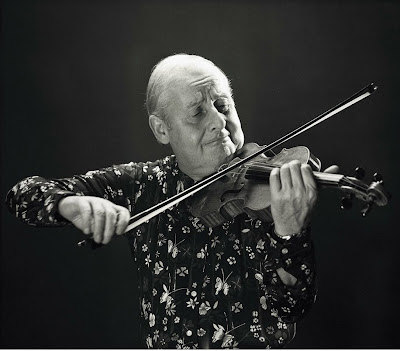 The self-taught Grappelli had a distinctive style that mixed tender lyricism, seemingly effortless swinging and hard-edged riffing with extraordinary harmonics. I was fortunate to see him perform in 1976 when he was 68 years old but played like he was half that age. He performed until shortly before his death in December 1997 at the ripe old age of 89.

After studying at the Paris Conservetoire in the mid-1920s Grappelli began busking in restaurants and courtyards playing polkas and waltzes. He also played piano in a silent movie theater, later recalling:

Grappelli went on to play piano in a dance band, and it wasn't until he met Reinhardt that he became serious about playing jazz violin. Although the two could hardly have been less similar -- Grappelli was educated and urbane and Reinhardt a freewheeling gypsy -- the two had a powerful musical rapport which led to the formation of the Hot Club in 1933.

The quintet was an immediate success, but in 1939 violinist and guitarist were separated by World War II, which Grappelli spent in and Reinhardt in . They were reunited after the war, but Reinhardt had pretty much lost his edge and was to die in 1953. Grappelli's career went into eclipse until the 1970s when he was discovered by a new generation of jazz fans and embarked on a solo career.