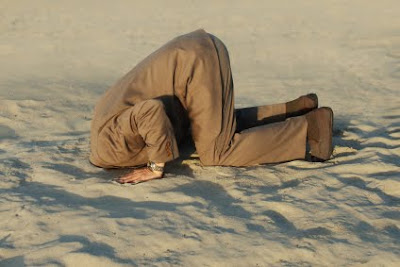 MR. CLOSURE HARD AT WORK
If you follow the ebb and flow of current events, you can't turn around these days without bumping into a dude by the name of Epistemic Closure.

Philosophers like to make Mr. Closure seem as complicated as Mr. Theory of Relativity, but he's a rather simple man, albeit one with a fatal flaw: While most people think they can increase their knowledge by accepting things that are logically implied to be true by the things they already know, Mr. Closure keeps falling through the same set of trap doors because the things he assumes to be true may not be and often aren't, while he is no longer able to accept any but a tiny fraction of the information available to him.

This brings us to two particularly pungent examples of epistemic closure in action: The conservative wing of the Republican Party (which is to say pretty much the entire kit and kaboodle) and the Roman Catholic Church (which is to say the Vatican hierarchy).

A pretty dissimilar bunch on their face, but they have this in common: They are determined to discredit internal and external dissidents because those dissidents are especially dangerous to their systems of epistemic closure, and survival is contingent on being out of touch with reality.

In the case of Republicans, this is a death wish known as political purity. If you don't completely buy into our Neanderthal views, then you are not welcome in our cave.

Jonathan Chait of The New Republic puts it this way:

"This epistemic closure can be a source of solidarity and energy, but it also renders the conservative media ecosystem fragile. Think of the complete panic China's rulers feel about any breaks in their Internet firewall: The more successfully external sources of information have been excluded to date, the more unpredictable the effects of a breach become. Internal criticism is then especially problematic, because it threatens the hermetic seal. It's not just that any particular criticism might have to be taken seriously coming from a fellow conservative. Rather, it's that anything that breaks down the tacit equivalence between "critic of conservatives" and "wicked liberal smear artist" undermines the effectiveness of the entire information filter. If disagreement is not in itself evidence of malign intent or moral degeneracy, people start feeling an obligation to engage it sincerely -- maybe even when it comes from the New York Times. And there is nothing more potentially fatal to the momentum of an insurgency fueled by anger than a conversation."

In the case of those Catholics, this is a rolling catastrophe known as the pedophile priest scandal. If you don't support the church in its time of crisis or deign to criticize it from outside, then you are an unworthy.

Peggy Noonan tackles this one in a Wall Street Journal column:

"Eight years ago . . . I wrote in these pages of the American church scandal, calling it calamitous, a threat to the standing and reputation of the entire church. . . . In the piece I criticized Cardinal Theodore McCarrick, then archbishop of Washington, who had suggested to the Washington Post that the scandal was media-driven, that journalists are having 'a heyday.'

"The piece didn't go over well in the American church, or the Vatican. One interesting response came from Cardinal Law [of Boston], whom I ran into a year later in Rome. 'We don't need friends of the church turning on the church at such a difficult time,' he said. 'We need loyalty when the church is going through a tough time.'

"I'd suggested in the piece that the rarefied lives cardinals led had contributed to an inability to understand the struggles of others and the pain of those abused, and soon Cardinal Law and I were talking about his mansion outside Boston. He asked me how it would look if he'd refused to live there. I told him it would look good, but more to the point, the church was going to lose the cardinal's mansion to trial lawyers, and it should sell it first and put the money in schools."

One consequence of the Republicans' obeisance to epistemic closure is that their party continues to shrink both in core supporters and geographically. And soon enough the Boston cardinal's mansion was indeed gone, sold off to pay victims of priestly abuse. Law's successor lives in a modest apartment.