Science Sunday: Communing With A Woolly Bear & Other Tales From Nature 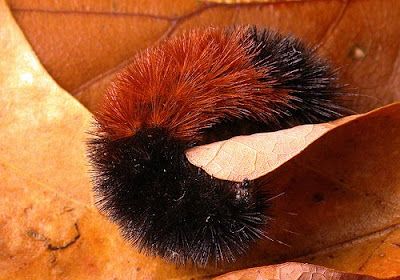 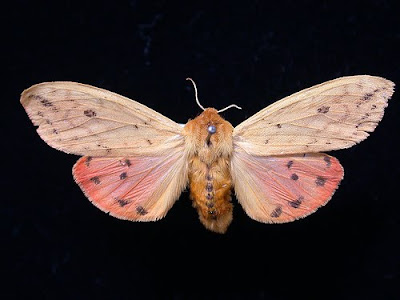 Today's Science Sunday is an opportunity to excerpt some recent musings from two of my favorite science bloggers and offer a tribute to a dear departed scientist.

If you live in certain climes, woolly bear caterpillars are familiar sights on the first warm days of spring, of which we are having an abundance in the Northeastern U.S.

As Chet Raymo reminds us at Science Musings after he encountered a woolly bear while on a walk, few animals have as incredible a life cycle:

"Perhaps I saw this same creature in the fall, trundling along the same path, looking for a cozy place to spend the winter, curled under leaves or logs like a sleeping kitten, snoozing in frozen slumber. Now it wakes, has a bite to eat, then rolls itself into a pupa, using its hairs to make the cocoon, lacing them together with silk. Two weeks later, an Isabella tiger moth emerges, presto-chango, like a magician's trick. A black-and-brown woolly bear goes into the box -- a wave of the wand -- a yellow-winged tiger moth emerges. Somehow, the creature has remade itself, rearranging its molecules, from crawling fuzzball to airborne angel.

"In few animals is the transformation so stunning. An insatiable leaf-eating machine becomes a sex-obsessed nectar-sipper. Shape, color, internal organs, mode of transportation -- all changed. It's as if an elephant became a swan, or a rattlesnake became a parakeet."

STUMBLING UPON A NEW DRAGON SPECIES 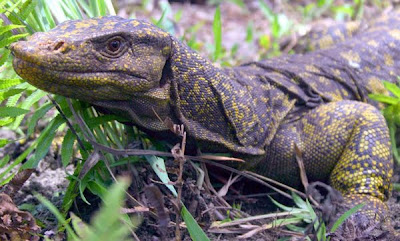 Humans have big footed to the furthest reaches of the planet, but many uncharted regions still hide unknown animal species. These usually are small creatures that hide easily and are hard to spot, but then there is an entirely new species of giant monitor lizard which budding herpetologist Luke Welton stumbled upon in the forests of the northern Philippines.

British blogger Ed Yong picks up the story at Not Exactly Rocket Science:

"At two metres in length, it’s not quite as large as its close relative the Komodo dragon, but it’s hardly inconspicuous either. It’s also brightly and beautifully coloured with intricate golden spots running down its otherwise black back. As is often the case, the lizard may be new to science but the local tribespeople -- the Agta and Ilongot -- have known about it for centuries. It’s actually one of their main sources of protein. Their name for the monitor, bitatawa, is now part of its official species name -- Varanus bitatawa.

"The dead lizard went on a round-the world trip from the Philippines to Kansas. There, Brown’s team counted its scales, examined its internal organs and sequenced its DNA. Their meticulous examination revealed that the animal was closely related to the Gray's mionitor (Varanus olivaceus), which also lives on the same island. But it was distinct enough to count as a species in its own right.

This new species is different in another way, too. Much to the relief of the little critters in its midst, it's a fruit eater. Only two other giant lizard species are, as well.

A FOND FAREWELL TO THORBS 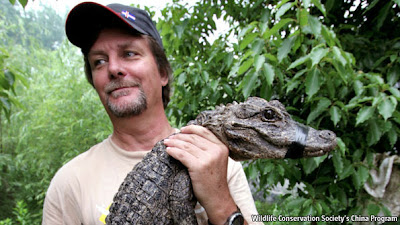 John Thorbjarnarson was a legend in Norwood, New Jersey, the sleepy town of his birth. Thorbs, as everyone called him, is fondly remembered by the Dear Friend & Conscience and a mutual friend as the kid who fell in love with reptiles and never let go.

The Economist recently ran an obituary of Thorbs, who died in India at age 52, apparently of malaria. An excerpt:

"The rippling fire of the tiger, the cuddliness of the panda, the viridian flash of the green-cheeked parrot, all argue that these most-endangered species should be saved. It’s harder to make the case for crocodilians. That bony, hideous head, with its unblinking yellow eye; those huge teeth, smelly with fish-debris, overhanging the long, cruel, curling smile; the slithering slide of the white underside down a muddy slope, into the water where those jaws, the strongest in Nature, will smash round the leg of a man and pull him under, thrashing and screaming.

"John Thorbjarnarson knew he could not end men's fear of crocodilians, hard-wired since hominids first ventured down from the trees into swamps that seethed with them. But in his 20-odd years working for the Wildlife Conservation Society he did more than anyone else to try. He commended the grace of their straight, silent swimming, their camouflage mottlings of yellow, grey and olive green, and the jewelled beauty of new, damp hatchlings no bigger than the span of his hand. He stressed their cultural importance, even magic: the dragon of China, bringer of good fortune, and the water god of ancient Egypt who made the grasses green. He extolled their niceness, snapping them as they basked companionably on warm mud or on a favourite bank of long grass, the forefoot of one embracing the back of another. Most crocodilians, he reminded people, preferred to dine on fish or molluscs rather than farmers. Most were sensitive, even shy."

When Thorbs first rolled up his sleeves, all 23 species of crocodilians were threatened or declining. Today at least a few have been stabilized because of his tireless work.