Blame The Politicians, Not The Troops 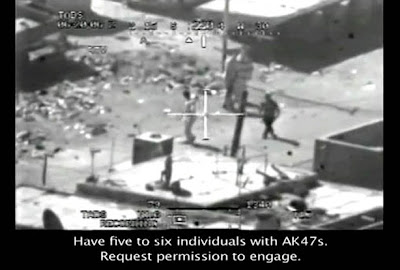 THE OUTRAGE OF THE MOMENT.
Image via WikiLeaks
Posted by Shaun Mullen at 12:08 AM
Email ThisBlogThis!Share to TwitterShare to FacebookShare to Pinterest

Indeed. Blame the politicians for glossing the fact that IEDs kill more troops than out and out war movie-style firefights. So, Americans cannot understand the desperate paranoia and exhaustion of the troops who finally shoot at ANY thing that moves and is not clearly non-threatening.

I may have been too subtle. Everything you say is true but none of it would have happened had the politicians not declared the wrong war in the wrong place at the wrong time.