Science Sunday: Baby It's Cold Outside 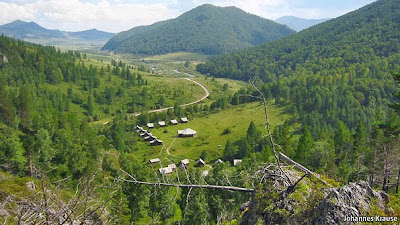 THE ALTAI MOUNTAINS OF SOUTHERN SIBERIA
Folklore and fantasy literature are full of tales of elves, goblins, dwarfs and all sort of "othermen" who live in caves, under bridges or in many thousand foot high redoubts, but now a scientist has discovered a real man in the mountain.

Svante Paabo, of the Max Planck Institute in Leipzig, Germany, who was the inspiration for Michael Crichton's Jurrasic Park because of his analyses of woolly mammoths and Neanderthal man, recently led a team that found a fragment of the tip of a little finger bone that was from neither an early modern human or a Neanderthal.

The new and as yet unnamed species -- the first to be defined solely by its DNA -- lived in the Altai Mountains of Southern Siberia.

A mere 30 milligrams of mitochondrial DNA was drilled out of the bone, which is estimated to be between 48,000 and 30,000 years old.

Mitochondria, according to an article in The Economist, "are much modified descendants of bacteria that took up residence in the ancestors of the modern animal and plant cells a billion years ago. As a relic of that ancestry they still have a few genes of their own and, because each cell has thousands of mitochondria, these genes are easier to find in old samples than are genes from the nucleus, of which there is only one per cell."
Johannes Krause, one of Paabo's colleagues, estimates that the newly discovered species last shared an ancestor with modern humans about a million years ago. What is so extraordinary about this is that it means its ancestors must have emerged from Africa where that common ancestor lived and migrated independently of the migrations which gave rise to Neanderthals and humans.

Speaking of mammoths, a new study concludes that the last known population of woolly mammoths, who roamed a remote Arctic island, were wiped out about 4,000 years ago and not 10,000 years ago as humans became the planet's dominant predator.

The culprit might have been disease, humans or a catastrophic weather event, but was almost certainly not climate change, suggests the study. Exactly why a majority of the huge tuskers that once strode in large herds across Eurasia and North America died out toward the end of the last Ice Age has been the subject of long and heated debate.

Some experts believe that woolly mammoths were hunted to extinction, while others argue that climate change was more to blame, leaving a species adapted for frigid climates ill-equipped to cope with a warming world.

It has long been known that a colony of woolly mammoths survived up until about 4,000 years ago on what is today Russia's Wrangel Island, north of Siberia in the Arctic Ocean.

To better understand their demise, researchers led by Anders Angerbjorn of Stockholm University analyzed bits of . . . you guessed it, mitochondrial DNA extracted from bone and tusk.

They reasoned that signs of dwindling genetic diversity would mean that too much inbreeding among a small population could have partially caused the animals to die out.

"It could be that the island was simply too small to support a long-term viable mammoth population," the authors speculated.