Voices In The Torture Debate 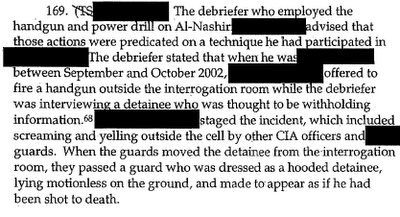 When the official announcement [of an investigation] came from Holder, it was still vague -- and probably deliberately so -- on where this is all heading. But there's still a suggestion that the main focus is indeed on the actions of the actual interrogators

either from the CIA or private contractors, and I don't think that's right. . . . for the most part, the interrogators were following the path set out for them by their leaders, a path that was horribly wrong from Day One. The real conspiracy here is top officials including Vice President Dick Cheney and his high-level cohorts. . . .

The CIA and private interrogators should be in the witness stand, not in the docket. Even more so than Watergate, the next couple of years will determine whether some Americans are truly above the law.

presumably odious man [Abd al-Nashiri] in order to extract information. It was to inflict that pain by exploiting, as a weakness, whatever flicker of nobility or love remained in an otherwise wretched soul. It was a method of torture that would have been effective only because and to the extent there was something human left in him. Maybe I'm being overly sentimental, but every cell in my body is telling me this is sick and wrong.

Having read the CIA report in its entirety, I am struck once again by how humane our treatment of captured terrorists was intended to be, and generally was. The

handful of incidents highlighted by press accounts of the report came to light precisely because they were reported as deviations from the treatment of detainees that had been authorized by DOJ lawyers.
-- JOHN HINDERAKER

Doesn't look like you'll see anything going beyond a few agents. I think the way this is going, and the general lack of outrage from Americans, says a lot about what we value. I really have no doubt that we could -- indeed would -- start torturing again, in the event of another terrorist attack. Maybe not under Obama, but certainly the

take-away is that the executive is going to get a great deal of leeway on these cases.

One remarkable aspect of this entire tragic affair is just how extensively papered it is. Everyone was trying to cover themselves, and it created a lot of evidence. This paper trail is significant for a couple of reasons. First, it makes it easy for a Truth Commission (or some similar entity) to assemble all the information and then to investigate gaps, etc. Second, it shows just how directly all of these policies came from straight the top.
-- PUBLIUS

Are we to believe that the men who killed 3,000 men, women, and children were so sensitive that those [CIA] threats would leave them psychologically scarred for life -- but mass murder didn't? Will the DOJ now prosecute police officers who blow smoke in subjects' faces, either inadvertently or deliberately, during interrogations? Isn't this defining torture down to an absurd level? If anything, it shows that the statutes governing torture are ridiculously vague.
-- ED MORRISSEY

If more of the covert side of the U.S. government is not encompassed by legislation, then every time a right wing government gets in, it will just go back to Bushism. Or

-- STEVE BENEN
Is there another part of the government that we allow to just engage in wanton lawlessness, and then when the misdeeds are uncovered, the first priority in the investigation is the department’s "morale?" If IRS agents found a way to embezzle millions of dollars, when we discovered it and prosecuted them, would we worry about the morale of the IRS?
-- JOHN COLE

[A]s if we weren't arguing over enough things already, any development on this front is bound to bring a whole other set of administration critics out of the woodwork, led by Mr. Undisclosed Location himself, who will surely pop up soon to say that Holder's move weakens our ability to defend ourselves and proves that the attorney general is a freedom-hater. Just what Obama needs.

Chris Cilizza said on Hardball that the White House is upset because the DOJ's tepid torture investigation is distracting from the health care debate.

Does anyone believe that?

I might believe that in other circumstances, but at this point I think the White House is thrilled to have Dick Cheney front and center.

-- GLENN GREENWALD
[I]t need not be the end of the story. Indeed, it can be the beginning if we make it so. We cannot stop this sad and minuscule attempt to restore a scintilla of accountability

to some individuals low down on the totem pole. Eric Holder is doing what he can. But we can continue to lobby and argue for the extension of accountability to the truly guilty men who made all this happen and still refuse to take responsibility for war crimes on a coordinated scale never before seen in American warfare, and initiated by a presidential decision to withdraw from the Geneva Conventions and refuse to abide by their plain meaning and intent.

Posted by Shaun Mullen at 12:28 AM
Email ThisBlogThis!Share to TwitterShare to FacebookShare to Pinterest